The First Family: Terror, Extortion, Revenge, Murder, and the Birth of the American Mafia (Hardcover) 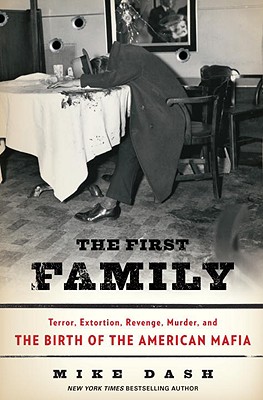 Before the notorious Five Families who dominated U.S. organized crime for a bloody half century, there was the one-fingered criminal genius Giuseppe Morello–known as “The Clutch Hand”–and his lethal coterie of associates. In The First Family, historian, journalist, and New York Times bestselling author Mike Dash brings to life this little-known story, following the rise of the Mafia in America from the 1890s to the 1920s, from the lawless villages of Sicily to the streets of Little Italy. Using an impressive array of primary sources–hitherto untapped Secret Service archives, prison records, trial transcripts, and interviews with surviving family members–this is the first Mafia history that applies scholarly rigor to the story of the Morello syndicate and the birth of organized crime on these shores.

Progressing from small-time scams to counterfeiting rings to even bigger criminal enterprises, Giuseppe Morello exerted ruthless control of Italian neighborhoods in New York, and through adroit coordination with other Sicilian crime families, his Clutch Hand soon reached far beyond the Hudson River.

The men who battled Morello’s crews were themselves colorful and legendary figures, including William Flynn, a fearless Secret Service agent, and Lieutenant Detective Giuseppe “Joe” Petrosino of the New York Police Department’s elite Italian Squad, whose pursuit of the brutal gangs ultimately cost him his life.

Combining first-rate scholarship and pulse-quickening action, and set amid rustic Sicilian landscapes and the streets of old New York, The First Family is a groundbreaking account of the crucial period when the American criminal underworld exploded with violent fury across the nation.

Mike Dash is a historian with an M.A. from Cambridge University and a Ph.D. from the University of London. A former professional journalist whose work has appeared in numerous national newspapers and magazines, Dash is the "New York Times "bestselling author of seven books, including "Satan's Circus, Thug, Batavia's Graveyard, " and "Tulipomania." He lives in London with his wife and daughter.

“I love Mike Dash‘s books, and this is his best so far. Who’d have thought that the origins of the American Mafia, lost for decades in the mists of the early 1900s, could be excavated so clearly and so enjoyably? Working from newly uncovered documents, Dash has given us the first close-up view of how, when, and where the Mafia began. It’s a tale of great intrigue, told with real flair, drama and, thankfully, precision.”—Bryan Burrough, author of Public Enemies: America’s Greatest Crime Wave and the Birth of the FBI, 1933—34

“Vividly imagined and prodigiously researched, The First Family tells the story of the American Mafia–‘the most secret and terrible organization in the world’–as never before, a gripping, timeless saga of murder, mayhem, and the darkest corners of the American dream. Mike Dash has a journalist’s nose for a good story and a novelist’s gift for telling it, and The First Family reads like the most compelling, sleep-defying fiction.”—Karen Abbott, author of Sin in the Second City

“An enthralling account . . . Decades before the Five Families emerged and more than half a century before Mario Puzo wrote The Godfather, Giuseppe Morello and his family controlled all manner of crime in New York City. . . . Readers may think they know the mob, but Morello’s ruthless rule makes even the fictional Tony Soprano look tame.”—Publishers Weekly, starred review

“Mike Dash is a brilliant researcher and writer who has done full justice to one of the most astonishing true stories.  Dash exhumes long forgotten evidence to tell us exactly how the Mafia arrived and—more importantly - how it thrived in this country.”—Nicholas Pileggi, the author of Wiseguy and Casino

" Dash has dug into tons of material and emerged with a work of popular history—written in lively, lucid prose, with a strong narrative line and a wealth of anecdote, much of it gory—that seems likely to be the definitive work on its subject for years to come."—Washington Post

“[Mike Dash] is at his best conjuring the birth of the Little Italys in Lower Manhattan and East Harlem at the end of the 19th century.”–New York Times

“An excellent, vividly written introduction to the birth of the Mafia…a must-read book for any student of American organized crime.”—Huntingtonnews.net

“The Mob comes to America, and rivers of blood flow. An altogether excellent account…Dash writes with flair and care alike, taking pains to keep a complicated story and a vast cast of characters on track while studding the text with nicely hard-boiled observations. Essential.”—Kirkus Reviews, starred review

“Morello's life story has it all—a harsh childhood, a physical infirmity, the tough life of an immigrant–plus the ultimate rise to power. British historian Dash does a terrific job…Recommended for all readers interested in true crime or New York City—or in a good history book.”—Library Journal

This feature require that you enable JavaScript in your browser.
END_OF_DOCUMENT_TOKEN_TO_BE_REPLACED

This feature require that you enable JavaScript in your browser.
END_OF_DOCUMENT_TOKEN_TO_BE_REPLACED

This feature require that you enable JavaScript in your browser.
END_OF_DOCUMENT_TOKEN_TO_BE_REPLACED