Banquet at Delmonico's: Great Minds, the Gilded Age, and the Triumph of Evolution in America (Hardcover) 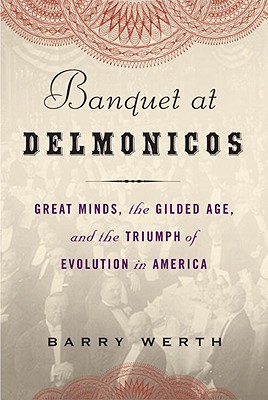 In Banquet at Delmonico’s, Barry Werth, the acclaimed author of The Scarlet Professor, draws readers inside the circle of philosophers, scientists, politicians, businessmen, clergymen, and scholars who brought Charles Darwin’s controversial ideas to America in the crucial years after the Civil War.

The United States in the 1870s and ’80s was deep in turmoil–a brash young nation torn by a great depression, mired in scandal and corruption, rocked by crises in government, violently conflicted over science and race, and fired up by spiritual and sexual upheavals. Secularism was rising, most notably in academia. Evolution–and its catchphrase, “survival of the fittest”–animated and guided this Gilded Age.

Darwin’s theory of natural selection was extended to society and morals not by Darwin himself but by the English philosopher Herbert Spencer, father of “the Law of Equal Freedom,” which holds that “every man is free to do that which he wills,” provided it doesn’t infringe on the equal freedom of others. As this justification took root as a social, economic, and ethical doctrine, Spencer won numerous influential American disciples and allies, including industrialist Andrew Carnegie, clergyman Henry Ward Beecher, and political reformer Carl Schurz. Churches, campuses, and newspapers convulsed with debate over the proper role of government in regulating Americans’ behavior, this country’s place among nations, and, most explosively, the question of God’s existence.

In late 1882, most of the main figures who brought about and popularized these developments gathered at Delmonico’s, New York’s most venerable restaurant, in an exclusive farewell dinner to honor Spencer and to toast the social applications of the theory of evolution. It was a historic celebration from which the repercussions still ripple throughout our society.

Banquet at Delmonico’s is social history at its finest, richest, and most appetizing, a brilliant narrative bristling with personal intrigue, tantalizing insights, and greater truths about American life and culture.

Barry Werth is the author of "31 Days, The Scarlet Professor, " which was a finalist for the National Book Critics Circle Award, "Damages," and "The Billion-Dollar Molecule." He lives in Northampton, Massachusetts.

Advance praise for Banquet at Delmonico’s

“Barry Werth has written a banquet of a book, a sumptuous feast of distinctive characters and delicious vignettes that places evolution indelibly at the center of Gilded Age controversy.”
–Christopher Benfey, author of The Great Wave and A Summer of Hummingbirds

“Few ideas have had a bigger (or sorrier) impact than the nineteenth-century notion that nations and races are engaged in a survival of the fittest–and that the Anglo-Saxons are the fittest of them all. By telling the story through a few shrewdly chosen and thoroughly fascinating people, Werth animates an idea and brings to life a memorable age.”
–Evan Thomas, author of Sea of Thunder and Robert Kennedy

“What a thrilling ride Barry Werth takes us on! His narrative history of the triumph of Darwinism in America has some of the qualities of David Lean’s Lawrence of Arabia: one bold character and striking scene after another, all in the service of a single great idea whose repercussions are still being felt today.”
–Anthony Giardina, author of Recent History and White Guys

“A rich, entertaining slab of Victorian American history, focused on the debate over evolution . . . Histories of ideas are rarely page-turners, but Werth has done the trick.”
–Kirkus Reviews (starred review)

This feature require that you enable JavaScript in your browser.
END_OF_DOCUMENT_TOKEN_TO_BE_REPLACED

This feature require that you enable JavaScript in your browser.
END_OF_DOCUMENT_TOKEN_TO_BE_REPLACED

This feature require that you enable JavaScript in your browser.
END_OF_DOCUMENT_TOKEN_TO_BE_REPLACED