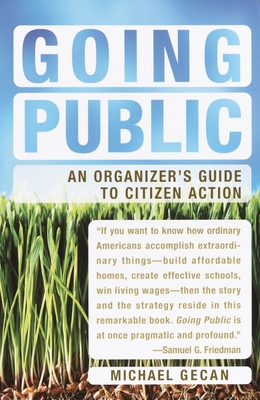 Urban decay can sap the determination—not to mention the soul—of anyone who experiences it. But there are forces that can and do reverse it. They are not spectators, or critics, or occasional demonstrators. They are groups of citizens, encouraged and trained to take power with dignity and creativity and unrelenting determination, and to make it work for them, day by day, month by month, and year to year.

For more than twenty-five years, Michael Gecan has been a professional organizer with Industrial Areas Foundation, which has trained thousands of little-known community groups from Brownsville, Texas, to Brownsville, Brooklyn. Having grown up witnessing at close range the destructive effects of political patronage on powerless, disenfranchised Chicago communities, Gecan knows from experience that strong relationships in the public sphere and sustained and disciplined organizing can spark the public and private alchemy necessary to achieve sidewalks, parks, schools, housing--and the collective renewal that results.

Full of good advice and entertaining accounts of success, Going Public is the story of those who, says Gecan, “succeed in unexpected ways and in unexpected places.”

Michael Gecan is a community organizer and has worked for the Industrial Areas Foundation (IAF) in New York, Chicago, Philadelphia, and Baltimore for more than thirty-five years. His writing has appeared in The Washington Post and the New York Daily News among others. He lives in Princeton, New Jersey.

“If you want to know how ordinary Americans accomplish extraordinary things—build affordable homes, createeffective schools, win living wages—then the story and the strategy reside in this remarkable book. Going Public is at once pragmatic and profound.” –Samuel G. Freedman

“A treatise on power for those whose goal is to make effective social change… a kind of manual of style for those who want to—at least once, just once—beat the bastards.” —The Village Voice

“A must-read for anyone interested in the promise of a flourishing democracy . . .a lucid colorful drama about the lfie of an organizer, with some important lessons about the future of progressive politics in America.” –The Star-Ledger

“This book celebrates the “ordinary” person who discovers his/her hidden power in a community—as an organizer. As a result, the place and the person come awake and alive. Going Public is one of the most hopeful books I’ve read in years.” –Studs Terkel, author of Will the Circle Be Unbroken?

“More than fifty years ago, the brilliant and outrageous Saul Alinsky wrote the holy scripture of community organizing, Reveille for Radicals, and it became a best-seller in an America determined to translate its highest ideals into concrete deeds. Now Mike Gecan, inheritor of Alinsky’s mantle with the Industrial Areas Foundation, has given this nation a muscular manual for the century ahead. There is nothing ethereal about the moral vision in Going Public. It is a book about doing right and making social change not by playing the pitiable victim but by wielding power against power..” –Samuel G. Freedman, author of Upon This Rock: The Miracles of a Black Church

“Gecan’s worldview was shaped by his own early encounters with raw power growing up in Chicago. He saw mobsters shaking down his father, a tavern owner; local Democratic bosses extorting families for hundreds of dollars to get on the list for city jobs that never materialized; blockbusting real estate hustlers destroying once vibrant neighborhoods. Going Public… is a kind of manual of style for those who want to–at least once, just once–beat the bastards.” –The Village Voice

“Trained by Saul Alinsky, whose Rules for Radicals is the original handbook for grass-roots organizing, Gecan…show[s] the incredible power people can have over their own lives and their own government when they stand together in creative ways. He exposes, through anecdotes, the themes of the book: the importance of building meaningful public relationships through individual, formal meetings; the necessity of understanding, and accepting as the rules of the game, the realpolitik of government, no matter how just your own cause is.”–America

“A compact, instructional guide that effectively updates Saul Alinsky’s Reveille for Radicals and Rules for Radicals for the 21st century.” –Library Journal

“The inside story of an extraordinary politics you probably didn’t know existed. Read this book and you may begin to believe that human-scale democracy is still possible in America.” –William Greider, author of Who Will Tell the People?: The Betrayal of American Democracy

“This is a classic! Going Public is an engaging, informative, and entertaining book with a message for all who are called on to organize to make a difference, whether in their community or their company. These insights from a consummate organizer are both a ‘how to’ and a ‘why to’ primer for anyone who wants to have an impact.”–Tom Wheeler, author of Take Command: Leadership Lessons from the Civil War

This feature require that you enable JavaScript in your browser.
END_OF_DOCUMENT_TOKEN_TO_BE_REPLACED

This feature require that you enable JavaScript in your browser.
END_OF_DOCUMENT_TOKEN_TO_BE_REPLACED

This feature require that you enable JavaScript in your browser.
END_OF_DOCUMENT_TOKEN_TO_BE_REPLACED