A Sense of the Mysterious: Science and the Human Spirit (Paperback) 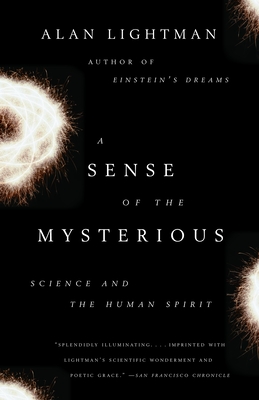 From the bestselling author of Einstein's Dreams comes this lyrical and insightful collection of science writing that delves into the mysteries of the scientific process--physics, astronomy, mathamatics--and exposes its beauty and intrigue.

In these brilliant essays, Lightman explores the emotional life of science, the power of imagination, the creative moment, and the alternate ways in which scientists and humanists think about the world. Along the way, he provides in-depth portraits of some of the great geniuses of our time, including Albert Einstein, Richard Feynman, Edward Teller, and astronomer Vera Rubin. Thoughtful, beautifully written, and wonderfully original, A Sense of the Mysterious confirms Alan Lightman's unique position at the crossroads of science and art.

“Original. . . . Heartfelt. . . . Illuminating. . . . Lightman writes with his characteristic, unmannered leanness. His style takes something from the scientists who ‘want to hear that call of certain truth, that clear note of a struck bell.’” —St. Louis Post-Dispatch

"A fine introduction to the excitement and pleasures of science by a scientist who is a humanist in the noblest sense of the word."—Los Angeles Times

"This slender volume mixes insightful scientific biographies with revealing autobiographical accounts and leavens them both with clearly told physics lessons for lay readers." —The Boston Globe

This feature require that you enable JavaScript in your browser.
END_OF_DOCUMENT_TOKEN_TO_BE_REPLACED

This feature require that you enable JavaScript in your browser.
END_OF_DOCUMENT_TOKEN_TO_BE_REPLACED

This feature require that you enable JavaScript in your browser.
END_OF_DOCUMENT_TOKEN_TO_BE_REPLACED