More Beautiful Than Before: How Suffering Transforms Us (Paperback) 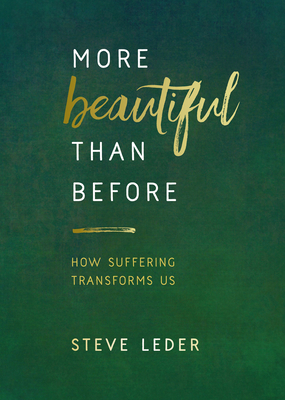 We all walk through hell. The point is not to come out empty-handed. . . . There is real and profound power in the suffering we endure if we transform that suffering into a more authentic, meaningful life.

In the spirit of such classics as When Bad Things Happen to Good People, A Grief Observed, and When Things Fall Apart, More Beautiful Than Before: How Suffering Transforms Us examines the many ways we can transform physical, psychological, or emotional pain into a more beautiful and meaningful life.

As the leader of Wilshire Boulevard Temple, one of America’s largest and most important congregations, located in the heart of Los Angeles, Rabbi Leder has witnessed a lot of pain: "It’s my phone that rings when people’s bodies or lives fall apart," he writes. "The couch in my office is often drenched with tears." After 27 years of listening, comforting, and holding so many who suffered, he thought he understood pain and its challenges—but when it struck hard in his own life and brought him to his knees, a new understanding unfolded before him as he felt pain’s profound effects on his body, spirit, and soul.

In this elegantly concise, beautifully written, and deeply inspiring book, Rabbi Leder guides us through pain’s stages of surviving, healing, and growing to help us all find meaning in our suffering. Drawing on his experience as a spiritual leader, the wisdom of ancient traditions, modern science, and stories from his own life and others’, he shows us that when we must endure, we can, and that there is a path for each of us that leads from pain to wisdom. "Pain cracks us open," he writes. "It breaks us. But in the breaking, there is a new kind of wholeness."

This powerful book will inspire in us all a life worthy of our suffering; a life gentler, wiser, and more beautiful than before.

After receiving his degree in writing and graduating Cum Laude from Northwestern University, and time studying at Trinity College, Oxford University, Rabbi Steven Z. Leder received a Master's Degree in Hebrew Letters in 1986 and Rabbinical Ordination in 1987 from Hebrew Union College. He currently serves as the Senior Rabbi of Wilshire Boulevard Temple, a prestigious synagogue in Los Angeles with two campuses and 2,400 families. Rabbi Leder is currently concluding his 225 million dollar campaign to develop the congregation's historic urban campus encompassing an entire city block. The campus is soon to include a new building by Pritzker Prize winning architect Rem Koolhaas.

In addition to his many duties at Wilshire Boulevard Temple Rabbi Leder taught Homiletics for 13 years at Hebrew Union College in Los Angeles. He is a regular contributor and guest on The Today Show, writes regularly for TIME, Foxnews.com, Maria Shriver's Sunday Paper, contributed a chapter to Charles Barkley's book Who's Afraid of a Large Black Man?, and has published essays in Town and Country, the Los Angeles Times, USA Today and the Los Angeles Jewish Journal where his Torah commentaries were read weekly by over 50,000 people. His sermon on capital punishment was included in an award winning episode of The West Wing. Rabbi Leder received the Louis Rappaport Award for Excellence in Commentary by the American Jewish Press Association and the Kovler Award from the Religious Action Center in Washington D.C. for his work in African American/Jewish dialogue and in 2012 presented twice at the Aspen Ideas Festival.

Rabbi Leder's second book More Money Than God: Living a Rich Life Without Losing Your Soul received critical and media attention including feature articles in the New York Times, Town and Country and appearances on ABC's Politically Incorrect, NPR, and CBS This Morning.

His third book More Beautiful Than Before; How Suffering Transforms Us was reached #4 on Amazon's overall best sellers list in its first week. It remains a best seller in several categories and has been translated into Korean and Chinese. More Beautiful Than Before has helped tens of thousands of people suffering from emotional or physical pain and continues to receive prestigious media attention including CBS This Morning, The Talk, The Steve Harvey Show, and four appearances on NBC's Today Show. He is now at work on his next book The Beauty of What Remains; What Death Teaches Us About Life, to be published by Penguin Random House in the spring of 2021.

Newsweek Magazine twice named him one of the ten most influential rabbis in America but most important to Steve is being Betsy's husband and Aaron and Hannah's dad. He is also a Jew who likes to fish. Go figure.

"The lessons Leder teaches are: acknowledge what is occurring, confront it honestly and own it, and then move on. Survive, heal, grow. And if you can do that, Leder says, you will emerge from the experience transformed. Not necessarily happier, wiser, or wealthier, but certainly more at peace. That is the gift More Beautiful Than Before offers us."
— Forbes

"I recommend this powerful book by my dear friend, Rabbi Steve Leder. It is filled not with theory, but with time-tested wisdom that can only come from years of experience helping people. This is such a beautiful book! It is the voice of experience, from a wounded healer who is both realistic and hopeful. I love Steve Leder, I love his congregation, and I loved reading this book! But don’t just read it, buy a copy for a friend."
— Pastor Rick Warren, #1 New York Times best-selling author of The Purpose Driven Life

"Steve Leder is an extraordinary man, with a heart full of grace and a soul generated by love. In this book, he teaches us how to not just survive suffering, but indeed, how to thrive from it."
— Tavis Smiley, PBS talk show host and #1 New York Times best-selling author of The Covenant with Black America

"Rabbi Leder has written an uplifting and hopeful work about the most difficult of subjects—how we can be transformed by the most difficult trials that face us during our lives. His stories and insights are deep and true. This is an important and very human book."
— Les Moonves, CEO of CBS Corporation

This feature require that you enable JavaScript in your browser.
END_OF_DOCUMENT_TOKEN_TO_BE_REPLACED

This feature require that you enable JavaScript in your browser.
END_OF_DOCUMENT_TOKEN_TO_BE_REPLACED

This feature require that you enable JavaScript in your browser.
END_OF_DOCUMENT_TOKEN_TO_BE_REPLACED