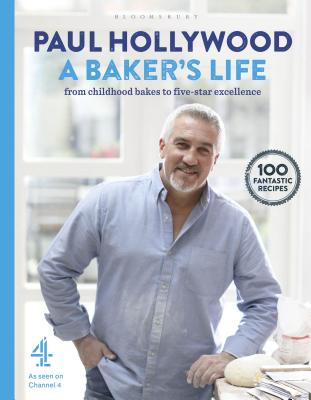 Accompanying the Channel 4 series, A Baker's Life contains 100 of Paul Hollywood's very best baking recipes, which have been finessed over decades spent as a baker.

Each chapter is filled with bakes that represent a different decade – learning the basics at his father's bakery; honing his pastry skills in the finest hotels; discovering the bold flavours of the Middle East while working in Cyprus; and finding fame with the phenomenally popular Great British Bake Off television series.

Thanks to this book (and its clear step-by-step instructions), recipes that Paul has spent years perfecting can be recreated at home. Favourites include garlic baguettes; feta and chive bread; chorizo and chilli Scotch eggs; mum's ginger biscuits; double chocolate Danish twists; and hazelnut cappuccino cake.

With photographs from personal family albums, plus many professional insights into and anecdotes that reveal what makes a great baker, A Baker's Life will show you how to bring the baking skills Paul has learnt over a lifetime into your own home kitchen.

Paul Hollywood shot to fame with his role as a judge on The Great British Bake Off. The son of a baker, Paul spent six years in Cyprus working at one of top hotels before becoming Head Baker at exclusive hotels in the UK, including Cliveden and the Dorchester. He went on to launch The Paul Hollywood Artisan Bread Company, which now supplies Waitrose, among others. The author of the bestselling How to Bake, Paul Hollywood's Bread, Paul Hollywood's Pies & Puds and Paul Hollywood's British Baking, Paul makes regular contributions to national press, tours nationwide with sellout cookery demonstrations, and works extensively with the Flour Advisory Board. He lives in Kent with his wife and son.

"The book offers an insight into Hollywood's deep baking roots as well as his own versions of simple and complex baked goods, including both sweet and savory items . . . many of these treats could become stars of your brunch menu." - The Daily Beast

"Fans of ‘The Great British Baking Show’ trust that Paul Hollywood is a great baker. Now we can know for sure . . . Consider this collection an Anglophile’s dream." - The Minneapolis Star Tribune

This feature require that you enable JavaScript in your browser.
END_OF_DOCUMENT_TOKEN_TO_BE_REPLACED

This feature require that you enable JavaScript in your browser.
END_OF_DOCUMENT_TOKEN_TO_BE_REPLACED

This feature require that you enable JavaScript in your browser.
END_OF_DOCUMENT_TOKEN_TO_BE_REPLACED