The Ashgate Research Companion to the Korean War (Hardcover) 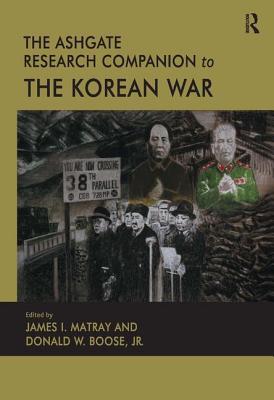 By Donald W. Boose, James I. Matray (Editor)
Email or call for price.

James I. Matray is Professor of History at California State University, Chico. He is the author of The Reluctant Crusade: American Foreign Policy in Korea, 1941-1950 and Korea Divided: The 38th Parallel and the Demilitarized Zone and editor of The East and the United States: An Encyclopedia of Relations Since 1784, Historical Dictionary of the Korean War, and Korea and the Cold War: Division, Destruction, and Disarmament. Donald W. Boose, Jr. is a retired Army colonel who teaches at the U.S. Army War College. Much of his 30-year military career involved Northeast Asia political-military matters and included six years with the U.N. Command Component of the Military Armistice Commission in Korea and service as Assistant Chief of Staff for Strategic Plans and Policy for U.S. Forces, Japan. His books include U.S. Army Forces in the Korean War and Over the Beach: U.S. Army Amphibious Operations in the Korean War.

This feature require that you enable JavaScript in your browser.
END_OF_DOCUMENT_TOKEN_TO_BE_REPLACED

This feature require that you enable JavaScript in your browser.
END_OF_DOCUMENT_TOKEN_TO_BE_REPLACED

This feature require that you enable JavaScript in your browser.
END_OF_DOCUMENT_TOKEN_TO_BE_REPLACED