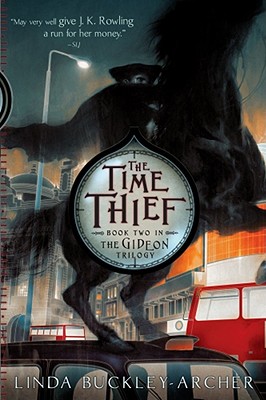 This is book number 2 in the Gideon Trilogy series.

What happens when a seventeenth-century bad guy has twenty-first-century technology? An accident with an antigravity machine catapulted Peter Schock and Kate Dyer back to 1763. A bungled rescue attempt leaves Peter stranded in the eighteenth century while a terrifying villain, the Tar Man, takes his place and explodes onto twenty-first-century London. Concerned about the potentially catastrophic effects of time travel, the NASA scientists responsible for the situation question whether it is right to rescue Peter. Kate decides to take matters into her own hands, but things don't go as planned. Soon the physical effects of time travel begin to have a disturbing effect on her. Meanwhile, in our century, the Tar Man wreaks havoc in a city whose police force is powerless to stop him.Set against a backdrop of contemporary London and revolutionary France, The Time Thief is the sequel to the acclaimed The Time Travelers.

"If you have kids who love Harry Potter and are constantly casting about for similar books to read, [The Time Travelers] might be just the ticket."

"Buckley-Archer may very well give J. K. Rowling a run for her money. This wonderfully rich and complex novel, written in lyrical and vivid language, is destined to be a classic....History interweaves with science, social issues in both centuries are thrown in; yet what readers will remember most is a fast-paced plot with a cliff-hanger ending....A rare gem."

"Buckley-Archer spins a rip-roaring tale replete with the raw details of life in the 18th century...nonstop action, appealing secondary characters, and healthy dollops of humor, all of which will have readers panting for the sequel."

"May very well give J. K. Rowling a run for her money."

This feature require that you enable JavaScript in your browser.
END_OF_DOCUMENT_TOKEN_TO_BE_REPLACED

This feature require that you enable JavaScript in your browser.
END_OF_DOCUMENT_TOKEN_TO_BE_REPLACED

This feature require that you enable JavaScript in your browser.
END_OF_DOCUMENT_TOKEN_TO_BE_REPLACED