In Our Time (Paperback) 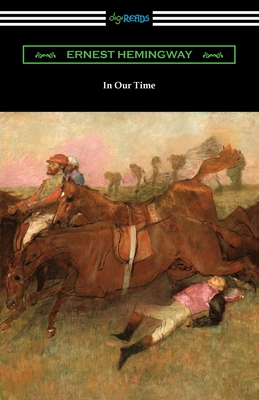 First published in 1925, "In Our Time" is a collection of short stories and vignettes by Ernest Hemingway written at the beginning of his literary career. Hemingway began working on some of the stories and pieces of prose that would make up the collection in 1923 and continued working on and refining his stories for the next two years. Many of the stories center around Hemingway's well-known and semi-autobiographical character, Nick Adams. Several are based on his own experiences in World War I and in Spain, where he became enamored with bull fighting. The collection introduces readers to the writing style that Hemingway would become so famous for in his later novels, the sparse language, matter of fact descriptions, and shocking violence presented in an emotionless and frank tone. Hemingway explored many of the topics that would play a prominent role in his later works, such problems with romantic relationships and marriage, the importance of male friendships, survival in a world of war and suffering, and the ever-present threat of death. "In Our Time" remains one of the most important short story collections of twentieth-century American literature and is a must-read for everyone who enjoys Hemingway's work. This edition is printed on premium acid-free paper.

This feature require that you enable JavaScript in your browser.
END_OF_DOCUMENT_TOKEN_TO_BE_REPLACED

This feature require that you enable JavaScript in your browser.
END_OF_DOCUMENT_TOKEN_TO_BE_REPLACED

This feature require that you enable JavaScript in your browser.
END_OF_DOCUMENT_TOKEN_TO_BE_REPLACED