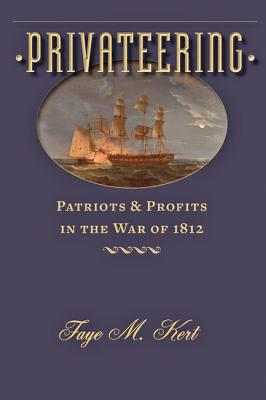 During the War of 1812, most clashes on the high seas involved privately owned merchant ships, not official naval vessels. Licensed by their home governments and considered key weapons of maritime warfare, these ships were authorized to attack and seize enemy traders. Once the prizes were legally condemned by a prize court, the privateers could sell off ships and cargo and pocket the proceeds. Because only a handful of ship-to-ship engagements occurred between the Royal Navy and the United States Navy, it was really the privateers who fought--and won--the war at sea.

In Privateering, Faye M. Kert introduces readers to U.S. and Atlantic Canadian privateers who sailed those skirmishing ships, describing both the rare captains who made money and the more common ones who lost it. Some privateers survived numerous engagements and returned to their pre-war lives; others perished under violent circumstances. Kert demonstrates how the romantic image of pirates and privateers came to obscure the dangerous and bloody reality of private armed warfare.

Building on two decades of research, Privateering places the story of private armed warfare within the overall context of the War of 1812. Kert highlights the economic, strategic, social, and political impact of privateering on both sides and explains why its toll on normal shipping helped convince the British that the war had grown too costly. Fascinating, unfamiliar, and full of surprises, this book will appeal to historians and general readers alike.

Faye M. Kert is an independent historian who earned her PhD from the University of Leiden. She is the author of Trimming Yankee Sails: Pirates and Privateers of New Brunswick and Prize and Prejudice: Privateering and Naval Prize in Atlantic Canada in the War of 1812.

This feature require that you enable JavaScript in your browser.
END_OF_DOCUMENT_TOKEN_TO_BE_REPLACED

This feature require that you enable JavaScript in your browser.
END_OF_DOCUMENT_TOKEN_TO_BE_REPLACED

This feature require that you enable JavaScript in your browser.
END_OF_DOCUMENT_TOKEN_TO_BE_REPLACED