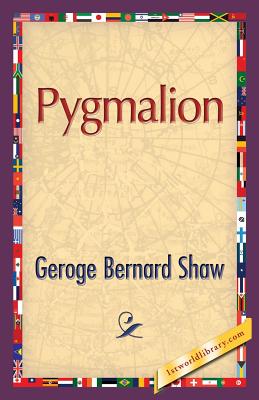 By George Bernard Shaw, 1st World Publishing (Editor)
$11.95
usually available in 3-7 days
(This is a special order book which cannot be returned.)

Purchase one of 1st World Library's Classic Books and help support our free internet library of downloadable eBooks. 1st World Library-Literary Society is a non-profit educational organization. Visit us online at www.1stWorldLibrary.ORG - - As will be seen later on, Pygmalion needs, not a preface, but a sequel, which I have supplied in its due place. The English have no respect for their language, and will not teach their children to speak it. They spell it so abominably that no man can teach himself what it sounds like. It is impossible for an Englishman to open his mouth without making some other Englishman hate or despise him. German and Spanish are accessible to foreigners: English is not accessible even to English-men. The reformer England needs today is an energetic phonetic enthusiast: that is why I have made such a one the hero of a popular play. There have been heroes of that kind crying in the wilderness for many years past. When I became interested in the subject towards the end of the eighteen-seventies, Melville Bell was dead; but Alexander J. Ellis was still a living patriarch, with an impressive head always covered by a velvet skull cap, for which he would apologize to public meetings in a very courtly manner. He and Tito Pagliardini, another phonetic veteran, were men whom it was impossible to dislike. Henry Sweet, then a young man, lacked their sweetness of character: he was about as conciliatory to conventional mortals as Ibsen or Samuel Butler. His great ability as a phonetician (he was, I think, the best of them all at his job) would have entitled him to high official recognition, and perhaps enabled him to popularize his subject, but for his Satanic contempt for all academic dignitaries and persons in general who thought more of Greek than of phonetics. Once, in the days when the Imperial Institute rose in South Kensington, and Joseph Chamberlain was booming the Empire, I induced the editor of a leading monthly review to commission an article from Sweet on the imperial importance of his subject. When it arrived, it contained nothing but a savagely derisive attack on a professor of language and literature whose chair Sweet regarded as proper to a phonetic expert only. The article, being libelous, had to be returned as impossible; and I had to renounce my dream of dragging its author into the limelight. When I met him afterwards, for the first time for many years, I found to my astonishment that he, who had been a quite tolerably presentable young man, had actually managed by sheer scorn to alter his personal appearance until he had become a sort of walking repudiation of Oxford and all its traditions. It must have been largely in his own despite that he was squeezed into something called a Readership of phonetics there. The future of phonetics rests probably with his pupils, who all swore by him; but nothing could bring the man himself into any sort of compliance with the university, to which he nevertheless clung by divine right in an intensely Oxonian way. I daresay his papers, if he has left any, include some satires that may be published without too destructive results fifty years hence. He was, I believe, not in the least an ill-natured man: very much the opposite, I should say; but he would not suffer fools gladly.

This feature require that you enable JavaScript in your browser.
END_OF_DOCUMENT_TOKEN_TO_BE_REPLACED

This feature require that you enable JavaScript in your browser.
END_OF_DOCUMENT_TOKEN_TO_BE_REPLACED

This feature require that you enable JavaScript in your browser.
END_OF_DOCUMENT_TOKEN_TO_BE_REPLACED