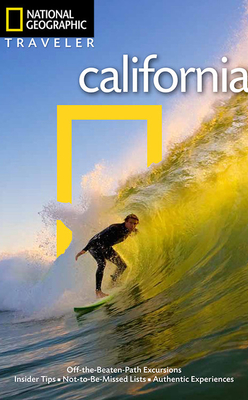 Californian Greg Critser begins this National Geographic guide in Los Angeles, with the beach communities of Venice and Santa Monica, and moves on to the Getty Center and the venues of the stars. Southward, you visit the Orange County beaches and a string of affluent seaside towns, including glitzy Laguna Beach and artsy La Jolla. The beautiful city of San Diego awaits with the world-class museums and zoo at Balboa Park, the fairy-tale Hotel Del, and the beautifully restored old town, with its Mexican flair. Moving north along the coast, you take in Father Serra's missions, the jaw-dropping Big Sur scenery, moneyed Carmel and historic Monterey. You will discover the best of San Francisco, essentially a city of neighborhoods, each one offering something special--Chinatown, North Beach, the revitalized South of Market area. Critser then explains how to get the most out of your visit to Napa Valley, as well as the neighboring Sonoma and Alexander Valleys, just as famous for their wines. From here, you enter the little traveled realm of the redwoods, preserved in such magnificent parks as Humboldt Redwoods State Park and Redwood National Park. Some of the towns you'll fall in love with include funky Mendocino, with its perch on cliffs overlooking the crashing sea, and tiny Guerneville, along the Russian River. Inland, in the Sierra Nevada mountains, old mining towns, ski resorts, and dazzling Lake Tahoe are all waiting to be explored. The book ends with a foray into the desert, anchored by Death Valley. Features include a driving tour of Los Angeles' funky architecture and walking tours of historic San Francisco, as well as cut-away drawings of Alcatraz and the sea-creature-filled tide pools. Extensive background information provides important cultural and historical context to this multi-faceted state. Completely updated and revised, with brand-new photographs, the 4th edition includes new experiential sidebars, insider tips from National Geographic experts and others, as well as a useful charting your trip" section that helps you plot your upcoming trip to the Golden State."

GREG CRITSER is a leading journalist on health and obesity whose work has appeared in Harper's, The Washington Post Magazine, The Wall Street Journal, Los Angeles Times, Washington Monthly, The New Yorker, and Worth, where he was responsible for the magazine's first National Magazine Award nomination in public interest journalism. His highly acclaimed book, Fat Land: How Americans Became the Fattest People in the World, was published in 2003. The author lives in Pasadena, California.

This feature require that you enable JavaScript in your browser.
END_OF_DOCUMENT_TOKEN_TO_BE_REPLACED

This feature require that you enable JavaScript in your browser.
END_OF_DOCUMENT_TOKEN_TO_BE_REPLACED

This feature require that you enable JavaScript in your browser.
END_OF_DOCUMENT_TOKEN_TO_BE_REPLACED