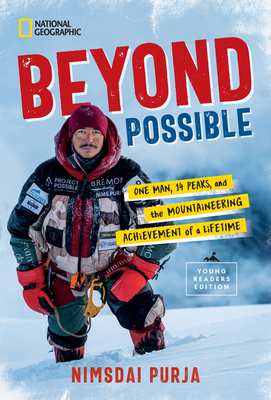 Join Nepalese climber Nimsdai Purja as he recounts his journey to scale all 8,000 meter “Death Zone” mountains in seven months.

In this action-packed memoir, young readers will not only learn how Purja physically accomplished this incredible feat, but also how his attitude, leadership skills, and willingness to learn from mistakes took him to the top. From his childhood growing up in Nepal, to a career as an elite soldier in the British army, Purja shows how his early life shaped him and enabled him to go beyond what people though was possible.

Nirmal "Nims" Purja is a Nepalese mountaineer and a holder of multiple mountaineering world records. Prior to taking on a career in mountaineering, he served with the British Armed Forces as a Nepalese Gurkha, and was a soldier in the Special Boat Service (SBS), an elite special forces unit of the Royal Navy. Purja is notable for having climbed all 14 of Earth’s eight-thousanders (mountain peaks above 8,000 meters or 26,000 feet) in a record time of six months and six days with the aid of bottled oxygen, beating the previous record of just under eight years. He was also the first to reach the summits of Mount Everest, Lhotse, and Makalu in a time period of 48 hours. In 2021, Purja, along with a team of nine other Nepalese mountaineers, successfully completed the first-ever winter ascent of Pakistan’s K2.

This feature require that you enable JavaScript in your browser.
END_OF_DOCUMENT_TOKEN_TO_BE_REPLACED

This feature require that you enable JavaScript in your browser.
END_OF_DOCUMENT_TOKEN_TO_BE_REPLACED

This feature require that you enable JavaScript in your browser.
END_OF_DOCUMENT_TOKEN_TO_BE_REPLACED