Farewell Addresses of the Presidents of the United States (Paperback) 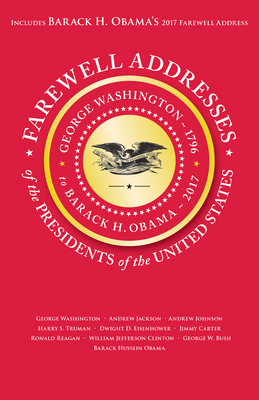 Farewell Addresses of the Presidents of the United States collects ten addresses delivered by departing presidents, from George Washington in 1796 to Barack Obama in 2017.

George Washington's farewell address set the standard for speeches delivered by departing leaders of the United States, and has been followed by nine subsequent presidents. President Washington's address has been so respected and influential, that it has been read aloud in the Senate chamber each year since 1896. In it, Washington gave his view of the Union, the Constitution, and good citizenship. The ten presidential farewell addresses gathered here provide a revealing look at our country's leaders, their view of their legacies, and their visions for the future.

This feature require that you enable JavaScript in your browser.
END_OF_DOCUMENT_TOKEN_TO_BE_REPLACED

This feature require that you enable JavaScript in your browser.
END_OF_DOCUMENT_TOKEN_TO_BE_REPLACED

This feature require that you enable JavaScript in your browser.
END_OF_DOCUMENT_TOKEN_TO_BE_REPLACED