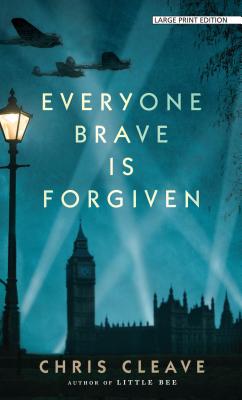 I whole heartedly recommend this splendid novel, set in London and on Malta during World War ll. The four central characters are wonderfully drawn and the banter between Tom and Alistair is superbly witty. Mary is an absolute delight and Hilda an unlikely heroic inspiration. The novel is harrowing at times, depicting the Blitz and the siege of Malta in horrifying detail. At this time of world wide pandemic pandemonium, this novel offers a beautifully nuanced perspective on human endurance and bravery.

“Everyone Brave Is Forgiven, from best-selling author Cleave, is storytelling at its finest. Ranging from the decimated streets of London after the Nazi blitz in WWII to the barren island of Malta under siege, Cleave's mastery is to introduce readers to characters in the midst of chaos who bring humanity to the sordid landscape of war. A book that will leave you both laughing and crying on the same page, Everyone Brave Is Forgiven reminds readers about the power of the novel in telling the fascinating stories of everyday people living in extraordinary times.”
— Casey Protti (E), Bookshop Santa Cruz, Santa Cruz, CA

London, 1939.
The day war is declared, Mary North leaves finishing school unfinished, goes straight to the War Office, and signs up.
Tom Shaw decides to ignore the war until he learns his roommate Alistair Heath has unexpectedly enlisted. Then the conflict can no longer be avoided.
Young, bright, and brave, Mary is certain she d be a marvelous spy. When she is bewilderingly made a teacher, she finds herself defying prejudice to protect the children her country would rather forget.
Tom, meanwhile, finds that he will do anything for Mary.
And when Mary and Alistair meet, it is love, as well as war, that will test them in ways they could not have imagined, entangling three lives in violence and passion, friendship and deception, inexorably shaping their hopes and dreams.
Set in London during the years of 1939 1942, when citizens had slim hope of survival, much less victory; and on the strategic island of Malta, which was daily devastated by the Axis barrage, Everyone Brave is Forgiven features little-known history and a perfect wartime love story inspired by the real-life love letters between Chris Cleave's grandparents. This dazzling novel dares us to understand that, against the great theater of world events, it is the intimate losses, the small battles, the daily human triumphs that change us most.

This feature require that you enable JavaScript in your browser.
END_OF_DOCUMENT_TOKEN_TO_BE_REPLACED

This feature require that you enable JavaScript in your browser.
END_OF_DOCUMENT_TOKEN_TO_BE_REPLACED

This feature require that you enable JavaScript in your browser.
END_OF_DOCUMENT_TOKEN_TO_BE_REPLACED