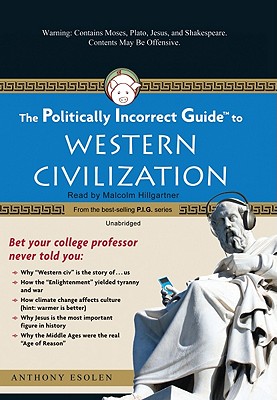 By Anthony Esolen, Malcolm Hillgartner (Read by)
$70.00
Special Order - may be out of print

Christianity, Judaism, dead white males, old-fashioned morality, the traditional family, tradition itself-everything the liberals hate can be summed up in two words: Western civilization. Here is the ultimate Politically Incorrect Guide: a sprightly, informative summary of the original source of all things politically incorrect from Moses, Caesar, and Christ, to Dante, Thomas More, and the Founding Fathers.

Western civilization is under attack. At universities and in the media, professors and pundits decry Western civilization as exploitative, destructive, and without value. But fear not: coming to its defense is Professor Anthony Esolen's The Politically Incorrect Guide to Western Civilization. This PI Guide will knock down the relativist arguments and show how the West laid the cornerstones for all of modern civilization, including historical, artistic, and intellectual achievements. Using historical evidence and compelling arguments, Esolen proves why we not only owe it to history but also to ourselves to set the record straight and respectfully acknowledge Western civilization's vital role in shaping our values and our world.

This feature require that you enable JavaScript in your browser.
END_OF_DOCUMENT_TOKEN_TO_BE_REPLACED

This feature require that you enable JavaScript in your browser.
END_OF_DOCUMENT_TOKEN_TO_BE_REPLACED

This feature require that you enable JavaScript in your browser.
END_OF_DOCUMENT_TOKEN_TO_BE_REPLACED