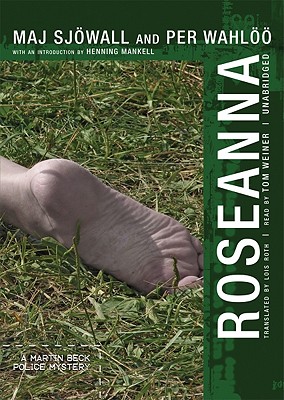 By Maj Sjowall, Per Wahloo, Henning Mankell (Introduction by)
$60.00

First book in a series of ten written by the husband and wife duo, journalists turned crime writers.

Written in the 1960-70s, these books  feature detective Martin Beck and his team at Stockholm Homicide as they unravel suspicious murders and disappearances.  The series is known, and beloved, for excellent plotting and fully realized characters among the cops on the team. Roseanna  follows the investigation of a naked body dredged up from a Swedish Lake, an auspicious beginning.

On a July afternoon, the body of a young woman is dredged from Sweden's beautiful Lake Vattern. Three months later, all that Police Inspector Martin Beck knows is that her name is Roseanna, that she came from Lincoln, Nebraska, and that she could have been strangled by any one of eighty-five people. As the melancholic Beck narrows down the list of likely suspects, he is drawn increasingly to the enigma of the victim, a free-spirited traveler with a penchant for the casual sexual encounter, and to the psychopathology of a murderer with a distinctive-indeed, terrifying-sense of propriety.

With its authentically rendered settings, vividly realized characters, and command over the intricately interwoven details of police detection, Roseanna is a masterpiece of suspense and sadness.

This feature require that you enable JavaScript in your browser.
END_OF_DOCUMENT_TOKEN_TO_BE_REPLACED

This feature require that you enable JavaScript in your browser.
END_OF_DOCUMENT_TOKEN_TO_BE_REPLACED

This feature require that you enable JavaScript in your browser.
END_OF_DOCUMENT_TOKEN_TO_BE_REPLACED