The War Below: The Story of Three Submarines That Battled Japan (Paperback) 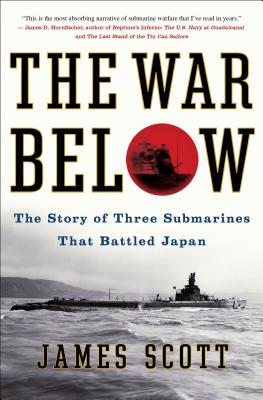 “Beautifully researched and masterfully told” (Alex Kershaw, New York Times bestselling author of Escape from the Deep), this is the riveting story of the heroic and tragic US submarine force that helped win World War II in the Pacific.

Focusing on the unique stories of three of the war’s top submarines—Silversides, Drum, and Tang—The War Below vividly re-creates the camaraderie, exhilaration, and fear of the brave volunteers who took the fight to the enemy’s coastline in World War II. Award-winning journalist James Scott recounts incredible feats of courage—from an emergency appendectomy performed with kitchen utensils to sailors’ desperate struggle to escape from a flooded submarine—as well as moments of unimaginable tragedy, including an attack on an unmarked enemy freighter carrying 1,800 American prisoners of war.

The casualty rate among submariners topped that of all other military branches. The war claimed almost one out of every five submarines, and a submarine crewman was six times more likely to die than a sailor onboard a surface ship. But this valorous service accomplished its mission; Silversides, Drum, and Tang sank a combined sixty-two freighters, tankers, and transports. The Japanese were so ravaged from the loss of precious supplies that by the war’s end, pilots resorted to suicidal kamikaze missions and hungry civilians ate sawdust while warships had to drop anchor due to lack of fuel. In retaliation, the Japanese often beat, tortured, and starved captured submariners in the atrocious prisoner of war camps.

Based on more than 100 interviews with submarine veterans and thousands of pages of previously unpublished letters and diaries, The War Below lets readers experience the battle for the Pacific as never before.

“This is the most absorbing narrative of submarine warfare that I’ve read in years. The research is so deep, and the writing so vivid, I could practically feel the vast ocean closing over me as these three boats ranged the Pacific looking for the kill.”
— James D. Hornfischer, author of Neptune’s Inferno: The U.S. Navy at Guadalcanal and The Last Stand of the Tin Can Sailors

"Scott has a gift for dramatic narrative that illuminates the human dimension of this drama beneath the seas. . . . This is a riveting tale for World War II buffs."
— Hank H. Cox

“Beautifully researched and masterfully told, James Scott’s book is an enthralling and important addition to the story of undersea warfare.”
— Alex Kershaw, New York Times bestselling author of Escape from the Deep and The Liberator

“Meticulously researched and vividly written, Scott transports us convincingly to the wardroom of the Silversides, the bridge of the Tang, the torpedo room of the Drum. If you want to know what it was like to fight in a U.S. submarine during World War II, this is your book.”
— Jonathan Parshall, co-author Shattered Sword: The Untold Story of the Battle of Midway

“James Scott brilliantly captures the intensity of submarine combat with his pulse-racing narrative about three famous boats of the Pacific Fleet. You’ll need a towel to wipe the perspiration from your brow.”
— Bruce Gamble, author of Fortress Rabaul and Black Sheep One

“James Scott has crafted a superb tale about a group of young Americans who went unflinchingly to war with the odds very much against them—a tale that won't (and shouldn't) be forgotten.”
— Flint Whitlock, author of The Depths of Courage: American Submariners at War with Japan, 1941-1945

“The War Below is a cut above. . . . This fast-paced book will be a welcomed addition to the personal libraries of even the most well-read students of submarine warfare.”
— Stephen L. Moore, author of Battle Surface! and Presumed Lost

“In the seven decades since WW II, U.S. Navy submarines’ primary mission has been passive, as a nuclear deterrent. But within living memory ‘the silent service’ waged a genuine war against a formidable enemy in the world’s greatest ocean. The War Below provides an intensely personal look inside the pressure hulls of three Pacific Fleet submarines that established historic records against the Japanese Empire. The epic war patrols of USS Silversides, Drum, and Tang provide gripping reading and serve as a memorial to the lost boats and crews ‘still on patrol.’”
— Barrett Tillman, author of Whirlwind and Enterprise

“Scott places the reader inside the boats for an understanding of the humor, the self-control, the ingenuity, the tenacity and self-sacrifice of submarine sailors at war. . . . The world of vignettes that he sprinkles throughout The War Below makes his book hard to put down, it’s a gripping tale that spans half the globe.”
— Carl LaVO, author of Back from the Deep and The Galloping Ghost

“Gripping. . . . Readers may find it difficult to resist the tension, drama and fireworks of this underappreciated but dazzlingly destructive American weapon of WWII.”
— Kirkus Reviews

“Beautifully crafted and carefully researched. . . . Scott has skillfully knit together the true and exciting stories of just three submarines (and their crews) that played extremely dramatic roles in the victory over Japan. . . . Their significant contribution to victory should be more widely understood as a result of his book.”
— Al Hutchison

This feature require that you enable JavaScript in your browser.
END_OF_DOCUMENT_TOKEN_TO_BE_REPLACED

This feature require that you enable JavaScript in your browser.
END_OF_DOCUMENT_TOKEN_TO_BE_REPLACED

This feature require that you enable JavaScript in your browser.
END_OF_DOCUMENT_TOKEN_TO_BE_REPLACED