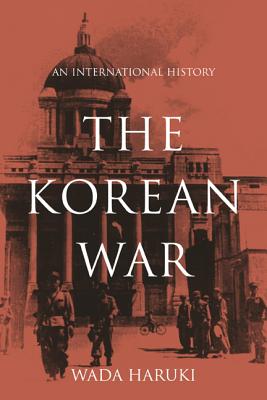 This classic history of the Korean War--from its origins through the armistice--is now available in English for the first time. Wada Haruki, one of the world's leading scholars of the war, has thoroughly revised his definitive study to incorporate new sources and debates. Drawing on archival and other primary sources in Russia, China, the United States, South Korea, Taiwan, and Japan, the author moves beyond national histories to provide the first comprehensive understanding of the Korean War as an international conflict from the perspective of all of the major actors. Tracing the North Korean invasion of South Korea in riveting detail, Wada provides new insights into the behavior of Joseph Stalin, Mao Zedong, Harry Truman, Kim Il Sung, and Syngman Rhee. He also provides new insights into the behavior of leaders and diplomats in Korea, China, Russia, and Eastern Europe and their rivals in other nations. He traces the course of the war from its origins in the failed attempts of both North and South Korean leaders to unify their country by force, ultimately escalating into a Sino-American war on the Korean Peninsula. Although sixty years have passed since the armistice, the Korean conflict has never really ended. Tensions remain high on the peninsula as Washington, Beijing, and Pyongyang, as well as Seoul and Pyongyang, face off. With rising international conflicts in East Asia, it is even more timely now to address the origins of the Korean War, the nature of the confrontation, and the ways in which it continues to shape the geopolitical landscape of Northeast Asia and the Western Pacific. With his unmatched ability to draw on sources from every country involved, Wada paints a rich and full portrait of a conflict that continues to generate controversy.

Wada Haruki is professor emeritus and former director of the Institute of Social Science, University of Tokyo. He studies modern Russian history and contemporary Korea. He is the author of Russia as the Problem of World History, Socialism as History, Kim Il Sung and the Anti-Japanese War in Manchuria, North Korea: Guerrilla Unit State Today, The Russo-Japanese War: Its Origins and the Beginning, and The Contemporary History of North Korea.

This feature require that you enable JavaScript in your browser.
END_OF_DOCUMENT_TOKEN_TO_BE_REPLACED

This feature require that you enable JavaScript in your browser.
END_OF_DOCUMENT_TOKEN_TO_BE_REPLACED

This feature require that you enable JavaScript in your browser.
END_OF_DOCUMENT_TOKEN_TO_BE_REPLACED