The Mortimers: The Turbulent Lives and Times of an Aristocratic Family 1360-1425 (Hardcover) 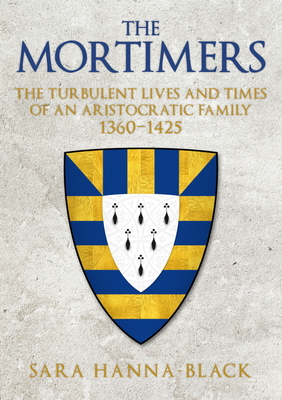 By Sara Hanna-Black
$29.95
Not Yet Published

The story of the Mortimers begins in Normandy, with Ranulph de Mortemer, whose father may have been the illegitimate son of a priest. This scandalous beginning echoed down to the later generations, by which time the family could claim the title Earl of March as well as significant holdings in Wales, the Welsh Marches and Ireland. Edmund Mortimer, 3rd Earl of March, opposed Edward III and John of Gaunt so successfully that he lived in fear of assassination. And Edward was not the last king to fear the threat of the Mortimer family. Edmund's illegitimate son Thomas helped to fund the Lords Appellant in their rebellion against Richard II and the 4th Earl, Roger Mortimer, was suspected by Richard of treason.Despite the king's distrust, however, Roger proved too popular for the king to act against him, and the warrant for the 4th Earl's arrest didn't arrive until a week after he was killed in an Irish ambush. Henry IV also had reason to fear the Mortimers, when Roger's brother joined Owain Glyndwr's rebellion against the Crown. Henry kept the 5th Earl, Edmund, a virtual prisoner, and Edmund's short-lived escape caused the king genuine panic for possibly the only time in his reign. When Edmund died, the Mortimer inheritance and claim to the throne passed to the fourteen-year-old Richard, Duke of York, whose later attempts to claim the throne would spark the bloody conflict now known as the Wars of the Roses. In this book, Sara Hanna-Black, an expert on the history of the Mortimer family, takes a look at the turbulent years of the later Mortimers from 1360 to 1425. The fascinating, rebellious and violent lives of these men, who threatened the reigns of many kings and yet were the source of the Yorkist claim to the throne, are as turbulent and intriguing as those of any fictional characters.

Sara Hanna-Black is studying medieval history at the University of Winchester and has worked as a researcher for Philippa Gregory's Cousins' War novels and for Dr Ian Mortimer. This is her first book. She lives in Winchester.

This feature require that you enable JavaScript in your browser.
END_OF_DOCUMENT_TOKEN_TO_BE_REPLACED

This feature require that you enable JavaScript in your browser.
END_OF_DOCUMENT_TOKEN_TO_BE_REPLACED

This feature require that you enable JavaScript in your browser.
END_OF_DOCUMENT_TOKEN_TO_BE_REPLACED