The Anarchy: The Darkest Days of Medieval England (Hardcover) 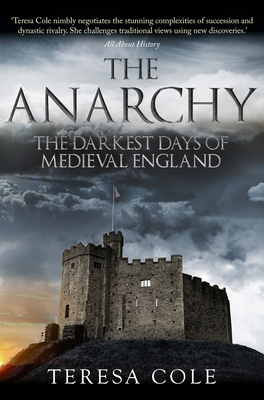 A period of England’s history when Fortune changed sides frequently and dramatically, and with a cast of vivid characters. This became known as "the Cousins' War" for the crown of England. The causes of the conflict will be examined; the loss of the heir of King Henry I in the White Ship and the king's efforts to secure the succession for his remaining child. The backgrounds of both major players: Stephen, nephew to the mighty Henry, showered with favors at court with ideas above his station: and Matilda, daughter of the king, sent away aged 8 to marry the Holy Roman Emperor, widowed, then forced into a hated second marriage. The book will chart the conflict that followed Stephen’s seizure of the crown from the woman to whom it had been promised. Lasting some 18 years, and involving not only most of England but Scotland and Normandy besides, the story covers all the conflict's twists and turns.

Teresa Cole is the author of Henry V: The Life of the Warrior King & the Battle of Agincourt 1415.

This feature require that you enable JavaScript in your browser.
END_OF_DOCUMENT_TOKEN_TO_BE_REPLACED

This feature require that you enable JavaScript in your browser.
END_OF_DOCUMENT_TOKEN_TO_BE_REPLACED

This feature require that you enable JavaScript in your browser.
END_OF_DOCUMENT_TOKEN_TO_BE_REPLACED