Jack and the Thames Torso Murders: A New Ripper? (Paperback) 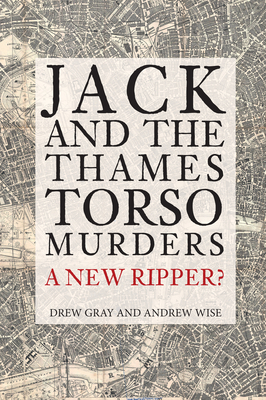 Between May 1887 and February 1891, a succession of horrific murders shook Victorian London. During a reign of terror lasting nearly four years numerous women were attacked. The police at the time believed the killings comprised two distinct sets—with two very different killers. Several were attributed to the relatively unpublicized "Thames Torso" series while the majority found their way into the Met’s "Whitechapel" or Jack the Ripper file. Despite the best efforts of contemporary detectives, no one was ever prosecuted for these crimes and, until now, no convincing suspect has been put forward for the two sets of murders. This ground-breaking work however has examined new lines of inquiry generated by recent scholarship. With several Thames torso killings now attributable to his hand, "Jack" it seems was culpable in upwards of 16 assaults—at least 13 of them fatal. Indeed, the study highlights how this individual was amply possessed of the three "cardinals" of the murderer—means, motive, and opportunity—and offers long-sought solutions to several case conundrums such as the Goulston Street evidence, the enduring Mad Doctor theory, and the Pinchin Street cross-over.

Drew Gray is a Senior Lecturer in the History of Crime at the University of Northampton and has published three books and several articles on crime and violence in 18th- and 19th-century London, including London Shadows. He has been lecturing on the Whitechapel murders and the social history of East London for 12 years. Andrew Wise is a history graduate with a research background in crime and espionage. He is also a former police officer and private investigator.

This feature require that you enable JavaScript in your browser.
END_OF_DOCUMENT_TOKEN_TO_BE_REPLACED

This feature require that you enable JavaScript in your browser.
END_OF_DOCUMENT_TOKEN_TO_BE_REPLACED

This feature require that you enable JavaScript in your browser.
END_OF_DOCUMENT_TOKEN_TO_BE_REPLACED