Triumph of the City: How Our Greatest Invention Makes Us Richer, Smarter, Greener, Healthier, and Happier (MP3 CD) 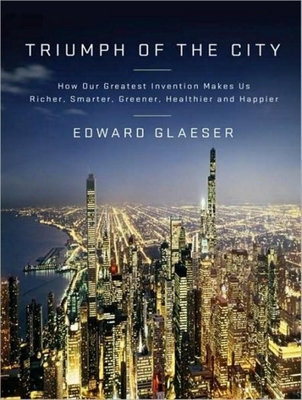 America is an urban nation. More than two thirds of us live on the three percent of land that contains our cities. Yet cities get a bad rap: they're dirty, poor, unhealthy, crime ridden, expensive, environmentally unfriendly. Or are they? As Edward Glaeser proves in this myth-shattering book, cities are actually the healthiest, greenest, and richest (in cultural and economic terms) places to live. New Yorkers, for instance, live longer than other Americans; heart disease and cancer rates are lower in Gotham than in the nation as a whole. More than half of America's income is earned in twenty-two metropolitan areas. And city dwellers use, on average, 40 percent less energy than suburbanites. Glaeser travels through history and around the globe to reveal the hidden workings of cities and how they bring out the best in humankind. Even the worst cities-Kinshasa, Kolkata, Lagos-confer surprising benefits on the people who flock to them, including better health and more jobs than the rural areas that surround them. Glaeser visits Bangalore and Silicon Valley, whose strangely similar histories prove how essential education is to urban success and how new technology actually encourages people to gather together physically. He discovers why Detroit is dying while other old industrial cities-Chicago, Boston, New York-thrive. He investigates why a new house costs 350 percent more in Los Angeles than in Houston, even though building costs are only 25 percent higher in Los Angeles. He pinpoints the single factor that most influences urban growth-January temperatures-and explains how certain chilly cities manage to defy that link. He explains how West Coast environmentalists have harmed the environment, and how struggling cities from Youngstown to New Orleans can "shrink to greatness." And he exposes the dangerous anti-urban political bias that is harming both cities and the entire country. Using intrepid reportage, keen analysis, and eloquent argument, Glaeser makes an impassioned case for the city's import and splendor. He reminds us forcefully why we should nurture our cities or suffer consequences that will hurt us all, no matter where we live.

Edward Glaeser is the Fred and Eleanor Glimp Professor of Economics at Harvard University and the author of "Triumph of the City."

Lloyd James has been narrating since 1996, has recorded over six hundred books in almost every genre, has earned six "AudioFile" Earphones Awards, and is a two-time nominee for the prestigious Audie Award.

"You'll...walk away dazzled by the greatness of cities and fascinated by this writer's nimble mind." ---The New York Times

This feature require that you enable JavaScript in your browser.
END_OF_DOCUMENT_TOKEN_TO_BE_REPLACED

This feature require that you enable JavaScript in your browser.
END_OF_DOCUMENT_TOKEN_TO_BE_REPLACED

This feature require that you enable JavaScript in your browser.
END_OF_DOCUMENT_TOKEN_TO_BE_REPLACED