Mr. G: A Novel about the Creation (Compact Disc) 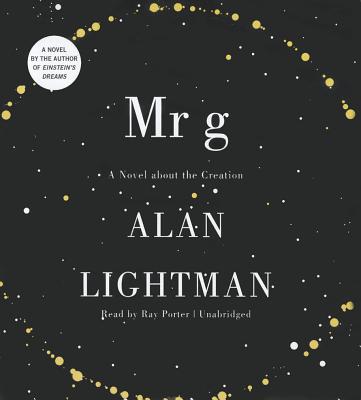 With echoes of Calvino, Rushdie, and Saramago, this is a stunningly imaginative work that celebrates the tragic and joyous nature of existence on the grandest possible scale. "As I remember, I had just woken up from a nap when I decided to create the universe." So begins Alan Lightman's playful and profound new novel, Mr. g, the story of Creation as narrated by God. Bored with living in the shimmering Void with his bickering Uncle Deva and Aunt Penelope, Mr. g creates time, space, and matter--then moves on to stars, planets, consciousness, and finally intelligent beings with moral dilemmas. But even the best-laid plans can go awry, and Mr. g discovers that with his creation of space and time come unforeseen consequences--especially in the form of the mysterious Belhor, a clever and devious rival. An intellectual equal to Mr. g, Belhor delights in provocation: he demands an explanation for the inexplicable, requests that intelligent creatures not be subject to rational laws, and maintains the necessity of evil. As Mr. g watches his favorite universe grow into maturity, he begins to understand how the act of creation can change the Creator himself.

This feature require that you enable JavaScript in your browser.
END_OF_DOCUMENT_TOKEN_TO_BE_REPLACED

This feature require that you enable JavaScript in your browser.
END_OF_DOCUMENT_TOKEN_TO_BE_REPLACED

This feature require that you enable JavaScript in your browser.
END_OF_DOCUMENT_TOKEN_TO_BE_REPLACED