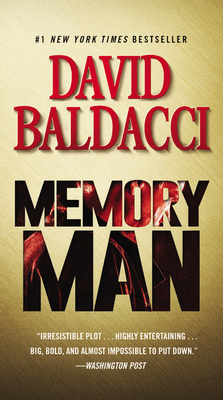 This is book number 1 in the Memory Man Series series.

This "impossible to put down" #1 New York Times bestseller introduces Amos Decker, a gifted police detective with a perfect memory who must solve a mystery he wishes he could forget: his family's murder (Washington Post).

The first time was on the gridiron. A big, towering athlete, he was the only person from his hometown of Burlington ever to play in the NFL. But his career ended before it had a chance to begin. On his very first play, a violent helmet-to-helmet collision knocked him off the field forever, and left him with an improbable side effect--he can forget nothing.

The second time was at home nearly two decades later. Now a police detective, Decker returned from a stakeout one evening and entered a nightmare--his wife, young daughter, and brother-in-law had been murdered.

His family destroyed, their killer's identity as mysterious as the motive behind the crime, and unable to forget a single detail from that horrible night, Decker finds his world collapsing around him. He leaves the police force, loses his home, and winds up on the street, taking piecemeal jobs as a private investigator when he can.

But over a year later, a man turns himself in to the police and confesses to the murders. At the same time a horrific event nearly brings Burlington to its knees, and Decker is called back in to help with this investigation. Decker also seizes his chance to learn what really happened to his family that night. To uncover the stunning truth, he must use his remarkable gifts and confront the burdens that go along with them. He must endure the memories he would much rather forget. And he may have to make the ultimate sacrifice.

Memory Man will stay with you long after the turn of the final page.

DAVID BALDACCI is a global #1 bestselling author, and one of the world's favorite storytellers. His books are published in over forty-five languages and in more than eighty countries, with 150 million copies sold worldwide. His works have been adapted for both feature film and television. David Baldacci is also the cofounder, along with his wife, of the Wish You Well Foundation, a nonprofit organization dedicated to supporting literacy efforts across America. Still a resident of his native Virginia, he invites you to visit him at DavidBaldacci.com and his foundation at WishYouWellFoundation.org.

"David Baldacci has written another thriller that will have readers engaged from the first page....Baldacci is a master storyteller...MEMORY MAN works because Amos Decker is an amazing character. Reading how Decker journeys from hitting rock bottom to finding ultimate redemption is nothing short of rewarding."
—Associated Press

"Perennial bestseller Baldacci unveils an offbeat hero with an unusual skill set and tragic past who takes on the evil mastermind behind a devastating school shooting..[Decker] proves a quirky, original antihero with a definite method to his madness...Readers will want to see Decker back on the printed page again and again."
—Kirkus Reviews

"It's big, bold and almost impossible to put down...Decker is one of the most unusual detectives any novelist has dreamed up...I called this novel a master class on the bestseller because of its fast-moving narrative, the originality of its hero and its irresistible plot....Highly entertaining."—Washington Post

"[A] strong first in a new thriller series from bestseller Baldacci....Baldacci supplies a multitude of clever touches as his wounded bear of a detective takes on a most ingenious enemy."
—Publishers Weekly

"Baldacci weaves a suspenseful story right up to the climactic face-off between these complex and compelling characters. Highly recommended for all thriller fans who love elusive, taunting criminals and the slightly bent but always determined detectives who pursue them."
—Library Journal (Starred Review)

"Baldacci's novels always have an emotional component...But MEMORY MAN stands out among his thrillers for its deeply felt - and earned - sense of catharsis and healing...Baldacci's last few books have been among his best, and it's a pleasure to see him produce emotionally and dramatically intense work at the height of his maturity as a novelist."—Richmond Times-Dispatch

This feature require that you enable JavaScript in your browser.
END_OF_DOCUMENT_TOKEN_TO_BE_REPLACED

This feature require that you enable JavaScript in your browser.
END_OF_DOCUMENT_TOKEN_TO_BE_REPLACED

This feature require that you enable JavaScript in your browser.
END_OF_DOCUMENT_TOKEN_TO_BE_REPLACED