A Bone to Pick: A Peggy Henderson Adventure (Paperback) 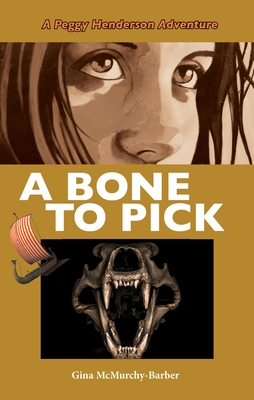 This is book number 4 in the Peggy Henderson Adventure series.

Peggy is off to a Viking site in North America where she unearths the remains of a brave young warrior.

It's a dream come true for Peggy Henderson when her friend, Dr. Edwina McKay, lets her tag along to the Viking settlement at L'Anse aux Meadows National Park in Newfoundland, where Dr. McKay will be teaching archaeology field school for the summer. Peggy already knows a lot about archaeology -- having been on three previous excavations -- but does she need to brag about it so much? After alienating herself from the other students with her know-it-all attitude, Peggy accidentally discovers a Viking burial cairn. The students and archaeologists are ecstatic. But when it comes time to excavate, she's banned from participating in the dig. Will Peggy's trip to Newfoundland end just as badly as the Vikings' did? She's afraid it will -- that is until she learns an unexpected lesson from a Viking warrior.

Gina McMurchy-Barber is the author of three previous books in the Peggy Henderson adventure series: Reading the Bones (shortlisted for the Silver Birch Award), Broken Bones, and Bone Deep. Her novel Free as a Bird was a finalist for the Governor General's Literary Award. She is also a recipient of the Governor General's Award for Excellence in Teaching Canadian History. Gina lives in Surrey, British Columbia.

This feature require that you enable JavaScript in your browser.
END_OF_DOCUMENT_TOKEN_TO_BE_REPLACED

This feature require that you enable JavaScript in your browser.
END_OF_DOCUMENT_TOKEN_TO_BE_REPLACED

This feature require that you enable JavaScript in your browser.
END_OF_DOCUMENT_TOKEN_TO_BE_REPLACED