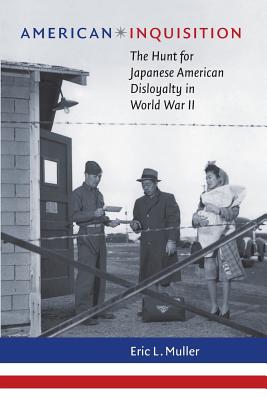 When the U.S. government forced 70,000 American citizens of Japanese ancestry into internment camps in 1942, it created administrative tribunals to pass judgment on who was loyal and who was disloyal. In American Inquisition, Eric Muller relates the untold story of exactly how military and civilian bureaucrats judged these tens of thousands of American citizens during wartime.

Some citizens were deemed loyal and were freed, but one in four was declared disloyal to America and condemned to repressive segregation in the camps or barred from war-related jobs. Using cultural and religious affiliations as indicators of Americans' loyalties, the far-reaching bureaucratic decisions often reflected the agendas of the agencies that performed them rather than the actual allegiances or threats posed by the citizens being judged, Muller explains.

American Inquisition is the only study of the Japanese American internment to examine the complex inner workings of the most draconian system of loyalty screening that the American government has ever deployed against its own citizens. At a time when our nation again finds itself beset by worries about an enemy within considered identifiable by race or religion, this volume offers crucial lessons from a recent and disastrous history.

This feature require that you enable JavaScript in your browser.
END_OF_DOCUMENT_TOKEN_TO_BE_REPLACED

This feature require that you enable JavaScript in your browser.
END_OF_DOCUMENT_TOKEN_TO_BE_REPLACED

This feature require that you enable JavaScript in your browser.
END_OF_DOCUMENT_TOKEN_TO_BE_REPLACED