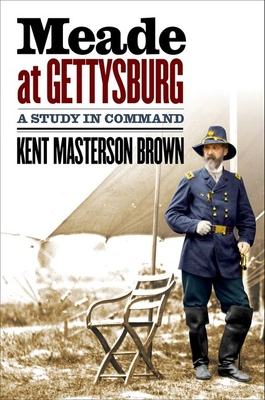 Although he took command of the Army of the Potomac only three days before the first shots were fired at Gettysburg, Union general George G. Meade guided his forces to victory in the Civil War's most pivotal battle. Commentators often dismiss Meade when discussing the great leaders of the Civil War. But in this long-anticipated book, Kent Masterson Brown draws on an expansive archive to reappraise Meade's leadership during the Battle of Gettysburg. Using Meade's published and unpublished papers alongside diaries, letters, and memoirs of fellow officers and enlisted men, Brown highlights how Meade's rapid advance of the army to Gettysburg on July 1, his tactical control and coordination of the army in the desperate fighting on July 2, and his determination to hold his positions on July 3 insured victory.

Brown argues that supply deficiencies, brought about by the army's unexpected need to advance to Gettysburg, were crippling. In spite of that, Meade pursued Lee's retreating army rapidly, and his decision not to blindly attack Lee's formidable defenses near Williamsport on July 13 was entirely correct in spite of subsequent harsh criticism. Combining compelling narrative with incisive analysis, this finely rendered work of military history deepens our understanding of the Army of the Potomac as well as the machinations of the Gettysburg Campaign, restoring Meade to his rightful place in the Gettysburg narrative.

This feature require that you enable JavaScript in your browser.
END_OF_DOCUMENT_TOKEN_TO_BE_REPLACED

This feature require that you enable JavaScript in your browser.
END_OF_DOCUMENT_TOKEN_TO_BE_REPLACED

This feature require that you enable JavaScript in your browser.
END_OF_DOCUMENT_TOKEN_TO_BE_REPLACED