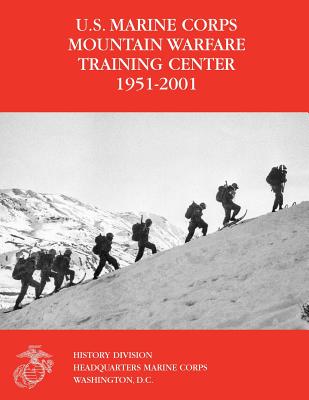 The following account represents a significant look at a half century of U.S. Marine Corps effort in the Sierra Nevada mountain range of California. This has been and is still the location of the Corps cold weather and mountain training facility. Over time the needs and demands for Marines and units prepared to operate under these conditions waxed and waned with the real world requirements of deployed forces. This was reflected in the realities of conflicts in the Korean Peninsula, the Cold War's northern and southern flanks, and in the current Global War in Terrorism fight in Afghanistan and elsewhere. While the future is often uncertain, this firm look at the past is useful to show how previous challenges have prompted creative and innovative responses. This is as much a story of evolution as an institution. The primary author, Major General Orlo K. "O.K." Steele took on this project based on personal experience as a mountain leader instructor, and unit commander. His purpose was to document the 1951 through 2001 story to demonstrate the continued relevance of mountain and cold weather training at Bridgeport and Pickel Meadow. A native of Oakland, California, General Steele's Marine Corps' active career spanned the years 1955 through 1990. As an infantry officer he served with distinction at every level from platoon, battalion, regiment, amphibious unit, amphibious brigade, division through expeditionary force. Other tours of duty included Marine Corps Recruit Depot, San Diego; the Mountain Warfare Training Center; Marine Detachment, USS America (CVA 66); NROTC officer instructor Dartmouth College; Marine Barracks Guantanamo Bay, Cuba; Marine Barracks, Washington, D.C.; and Headquarters, U.S. Marine Corps. He is a graduate of Stanford University, Marine Corps Amphibious Warfare School, Marine Corps Command and Staff College, and the National War College. Since retirement he has been active on advisory boards, mentoring, and with this project which he conceived, resourced, and executed. The coauthor Lieutenant Colonel Michael I. "Mike" Moffett took part in this effort as a member of the History Division's Field History Branch. He assisted in the review and revision of the entire manuscript and authored the sidebars and final chapter. A New Hampshire native, he served as a regular and reserve infantry officer at the platoon, company, and battalion level. His service also included his attendance at the mountain leader winter course at the Mountain Warfare Training Center. Lieutenant Colonel Moffett's other significant duties have been with the Marine Enlisted Commissioning Program Preparatory Course, as well as serving a field historian tour in Afghanistan. He is a graduate of the University of New Hampshire and Plymouth State University. Mr. Ken Williams's editing and design branch prepared the manuscript for publication with editing by Ms. Wanda Renfrow and layout by Mr. W. Stephen Hill.

This feature require that you enable JavaScript in your browser.
END_OF_DOCUMENT_TOKEN_TO_BE_REPLACED

This feature require that you enable JavaScript in your browser.
END_OF_DOCUMENT_TOKEN_TO_BE_REPLACED

This feature require that you enable JavaScript in your browser.
END_OF_DOCUMENT_TOKEN_TO_BE_REPLACED