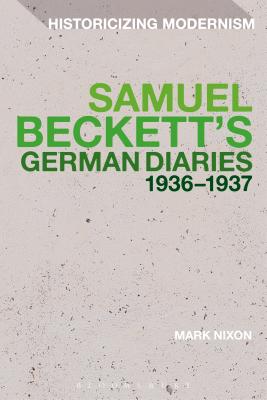 By Mark Nixon, Erik Tonning (Editor), Matthew Feldman (Editor)
$25.95
Special Order - may be out of print

Six diary notebooks kept by Samuel Beckett during his 1936-7 trip through Nazi Germany were discovered in 1989. Samuel Beckett's German Diaries 1936-1937 is the first study to explore the relevance of these diaries to Beckett's development as a writer.

Using the diaries as the central point of focus, Nixon draws on unpublished manuscripts, notebooks, correspondence, reading notes from the 1930s to reflect on both Beckett's creative evolution prior to 1936 and the direction his writing took after his return to Dublin in April 1937. As well as gaining an insight into Beckett's reading of classical German literature, Nixon shows how the pared-down style of writing, the self-examination and the importance of the visual arts that govern Beckett's post-war works traces back to the pages of these notebooks.

By illuminating how Beckett's writing and aesthetics underwent a far-reaching change during the 1930s, Nixon's study is crucial to our understanding of the emergence of Beckett as a radical writer in the post-war years.

Mark Nixon is Lecturer in English at the University of Reading, UK, where he is also the Director of the Beckett International Foundation.

This feature require that you enable JavaScript in your browser.
END_OF_DOCUMENT_TOKEN_TO_BE_REPLACED

This feature require that you enable JavaScript in your browser.
END_OF_DOCUMENT_TOKEN_TO_BE_REPLACED

This feature require that you enable JavaScript in your browser.
END_OF_DOCUMENT_TOKEN_TO_BE_REPLACED