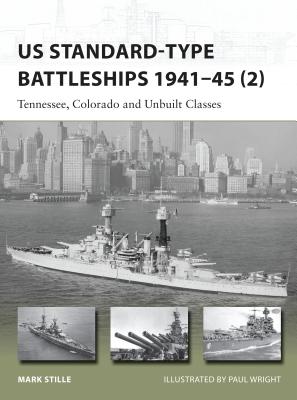 This is book number 229 in the New Vanguard series.

This book completes an authoritative two-part study on the Standard-type US battleships of World War II - ships that were designed to fight a different type of war than the one that unfolded. It gives precise technical details of the design history and features of the Tennessee, Colorado and the unfinished South Dakota and Lexington classes, whilst providing an operational history of the former two. Much like the earlier classes, these ships' design adhered to consistent levels of performance to simplify battle-line operations, but they still incorporated evolutions of technology to match the latest Japanese types for the predicted decisive fleet engagements. In the end it was clear that war at sea would no longer see dreadnoughts slugging it out in open water, and these battleships were mostly utilized for fire support in US amphibious landings in the Pacific. Written by a leading expert on the US Navy in World War II and augmented by contemporary photographs and specially commissioned illustrations, this is the other half of the story of the US Standard-type battleships - from the terrible damage they sustained at Pearl Harbor, to their support of the war-winning landings of the US Marine Corps and US Army.

Mark E. Stille (Commander, United States Navy, retired) received his BA in History from the University of Maryland and also holds an MA from the Naval War College. He has worked in the intelligence community for 35 years including tours on the faculty of the Naval War College, on the Joint Staff and on US Navy ships. He is currently a senior analyst working in the Washington DC area. He is the author of numerous Osprey titles, focusing on naval history in the Pacific. The author lives in Dunn Loring, VA.

This feature require that you enable JavaScript in your browser.
END_OF_DOCUMENT_TOKEN_TO_BE_REPLACED

This feature require that you enable JavaScript in your browser.
END_OF_DOCUMENT_TOKEN_TO_BE_REPLACED

This feature require that you enable JavaScript in your browser.
END_OF_DOCUMENT_TOKEN_TO_BE_REPLACED