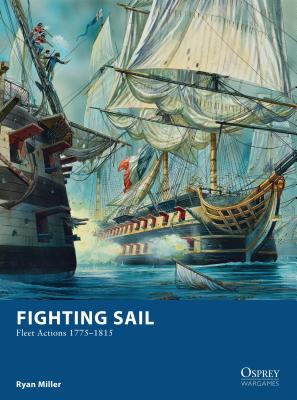 In the years between 1776 and 1815, grand square-rigged sailing ships dominated warfare on the high seas. Fighting Sail is a tabletop wargame of fleet battles in this age of canvas, cannon, and timbers. Players take on the roles of fleet admirals from one of eight different national fleets: America, Britain, France, Spain, The Netherlands, Portugal, Russia and Sweden in battles ranging from the American War of Independence to the Napoleonic Wars and the War of 1812. Each fleet has access to different ships, tactics, and command personalities - each with its own strengths and weaknesses. Offering a unique blend between detail and simplicity, the scenarios included enable the recreation of historic actions or 'what-if' scenarios. Join the battle and experience the adventurous age of the fighting sail!

"The value of [Osprey Wargame] books is unbelievably good. Generally, $20 can get you an interesting ruleset with great artwork." - Jacob Stauttener, Must Contain Minis

This feature require that you enable JavaScript in your browser.
END_OF_DOCUMENT_TOKEN_TO_BE_REPLACED

This feature require that you enable JavaScript in your browser.
END_OF_DOCUMENT_TOKEN_TO_BE_REPLACED

This feature require that you enable JavaScript in your browser.
END_OF_DOCUMENT_TOKEN_TO_BE_REPLACED