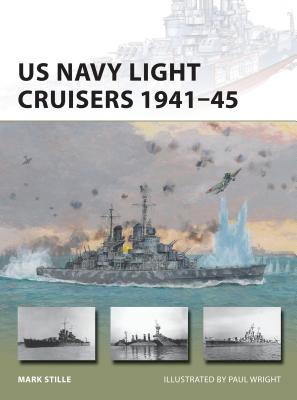 This is book number 236 in the New Vanguard series.

During World War II, the United States built 72 light cruisers of various classes. In response to the severe air threat that surface ships faced, new cruisers were designed with increasingly heavy antiaircraft weaponry as well as the traditional six-inch guns. With the speed and range to keep up with aircraft carriers, and their considerable antiaircraft capability, they were a mainstay of the carrier escorts.

This book examines every US light cruiser produced, including those of the Fargo and Worcester classes--which were actually completed after World War II had ended--tracing their design, development, and evolution throughout the war and beyond.

Mark Stille is the author of numerous Osprey titles focusing on naval history in the Pacific. He recently concluded a nearly 40-year career in the intelligence community, including tours on the faculty of the Naval War College, on the Joint Staff and on US Navy ships. He received his BA in History from the University of Maryland and also holds an MA from the Naval War College.

"There are superb photos and illustrations provided to give one a sense of what these ships were like. If you are a nautical modeler or a fan of ships, or just want to know more about these vessels, I highly recommend picking this one up." - Modeling Madness

"A truly massive amount of technical and historic information is contained within this slim volume’s 48 pages, making this a great little primer for an important category of US Navy ships. Highly recommended." - IPMS/USA

This feature require that you enable JavaScript in your browser.
END_OF_DOCUMENT_TOKEN_TO_BE_REPLACED

This feature require that you enable JavaScript in your browser.
END_OF_DOCUMENT_TOKEN_TO_BE_REPLACED

This feature require that you enable JavaScript in your browser.
END_OF_DOCUMENT_TOKEN_TO_BE_REPLACED