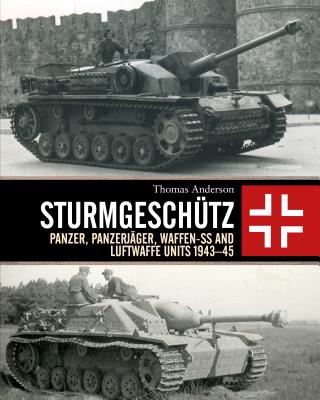 By Thomas Anderson
$45.00
Special Order - may be out of print

During the inter-war years a new kind of support weapon was recommended to the German general staff by Erich von Manstein: an armored assault gun designed to destroy prepared defensive positions and enemy tanks, laying the groundwork for an assault by the Panzers and Panzergrenadiers.

First rolled out in 1940, the Sturmgeschütz assault gun was an instant success, and played a vital role in the Wehrmacht throughout the war. Cheaper and quicker to produce than the German Panzers, it was deployed widely and with great success, particularly in the later years of the war, forming an integral part of armored units as well as its more traditional infantry support role.

This book traces the story of the Sturmgeschütz from its original design in the 1930s to its use in the last desperate days of the German war effort. Drawing on original material from German archives and private collections, and replete with over 200 images, Sturmgeschütz tells the thrilling story of the Wehrmacht's unsung workhorse.

A German national, Thomas Anderson is a specialist in the German Armored Fighting Vehicle of World War II. He has spent decades trawling the archives throughout Germany and the rest of Europe to discover little-known facts and never previously published photographs of the might of the Blitzkrieg. A modeler, he regularly contributes to popular modeling and historical magazines across the globe including Military Modelcraft International (UK), Steel Art (Italy), Historia Militar (Spain), and Batailles & Blindes (France) as well as many others.

This feature require that you enable JavaScript in your browser.
END_OF_DOCUMENT_TOKEN_TO_BE_REPLACED

This feature require that you enable JavaScript in your browser.
END_OF_DOCUMENT_TOKEN_TO_BE_REPLACED

This feature require that you enable JavaScript in your browser.
END_OF_DOCUMENT_TOKEN_TO_BE_REPLACED