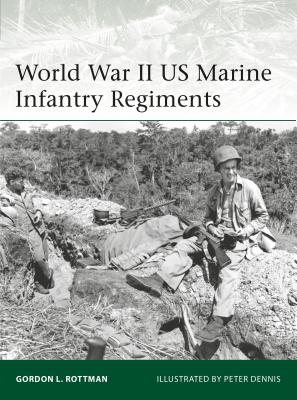 By Gordon L. Rottman, Peter Dennis (Illustrator)
$19.00
Special Order - may be out of print

The United States Marine Corps came into its own in the Pacific Islands campaign against Japan in World War II. From Guadalcanal to Okinawa, US Marines formed the tip of the spear as Allied forces sought to push the Japanese back to their Home Islands.

This fascinating study tracks the deployments of the various Marine divisions throughout the war and explains their composition, but also goes deeper, to detail the individual regiments--the focus of the Marines' identity and pride. It explains the organization of the Marine infantry regiment and its equipment, and how they developed during the war. The Marine infantryman's evolving uniforms, field equipment, and weapons are illustrated throughout using specially commissioned artwork and detailed descriptions to produce a fitting portrait of the US military's elite fighting force in the Pacific.

"...presents a brief but thorough description of the organization and use of the most successful amphibious warfare specialists during the war in the Pacific, as well as background on their formation and history." - IPMS / USA

This feature require that you enable JavaScript in your browser.
END_OF_DOCUMENT_TOKEN_TO_BE_REPLACED

This feature require that you enable JavaScript in your browser.
END_OF_DOCUMENT_TOKEN_TO_BE_REPLACED

This feature require that you enable JavaScript in your browser.
END_OF_DOCUMENT_TOKEN_TO_BE_REPLACED