MacArthur’s Air Force: American Airpower over the Pacific and the Far East, 1941–51 (Hardcover) 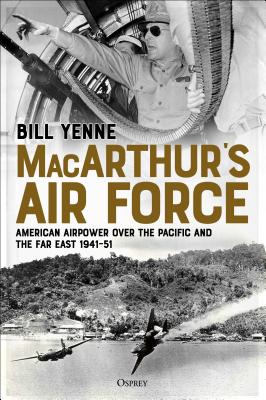 General Douglas MacArthur ended World War II controlling one of the most powerful air forces in the world. This new history traces its development from its origins in the Philippines through to its eventual victory in the skies over Japan and its key role in the Korean War.

General Douglas MacArthur is one of the towering figures of World War II, and indeed of the twentieth century, but his leadership of the second largest air force in the USAAF is often overlooked. When World War II ended, the three numbered air forces (the Fifth, Thirteenth and Seventh) under his command possessed 4,004 combat aircraft, 433 reconnaissance aircraft, and 922 transports. After being humbled by the Japanese in the Philippines in 1942, MacArthur and his air chief General George Kenney rebuilt the US aerial presence in the Pacific, helping Allied naval and ground forces to push back the Japanese Air Force, re-take the Philippines, and carry the war north towards the Home Islands. Following the end of World War II MacArthur was the highest military and political authority in Japan, and at the outbreak of the Korean War in June 1950 he was named as Commander in Chief, United Nations Command. In the ten months of his command his Far East Air Forces increased dramatically and saw the first aerial combat between jet fighters.

Written by award-winning aviation historian Bill Yenne, this engrossing book traces the journey of American air forces in the Pacific under General MacArthur's command, from their lowly beginnings to their eventual triumph over Imperial Japan, followed by their entry into the jet age in the skies over Korea.

BILL YENNE is the author of more than two dozen books on military and historical topics. The Wall Street Journal recently called his Indian Wars: The Campaign for the American West "splendid" and went on to say that it "has the rare quality of being both an excellent reference work and a pleasure to read." His other works include The American Aircraft Factory in World War II, Operation Cobra and the Great Offensive: Sixty Days that Changed the Course of World War II, Aces: True Stories of Victory and Valor in the Skies of World War II, Black '41: The West Point Class of 1941 and the American Triumph in World War II, and The History of the US Air Force. He is a member of the American Aviation Historical Society, and is a regular contributor to International Air Power Review. He worked with the legendary US Air Force commander, General Curtis E. LeMay, to produce Superfortress: The B-29 and American Airpower in World War II. He lives in San Francisco.

“A book by Bill Yenne is always a treat, and this one exceeds his own best efforts. I can guarantee that you will be engaged by his master storytelling from his opening words to the very last page of what I consider to be his finest work yet.” —Col. Walter J. Boyne, USAF (Ret.), combat veteran and aviation historian

“'Bill Yenne has given readers another fact-filled, chronological book detailing the Pacific War with MacArthur's Air Force... [This book] is for the reader who wants a broad history filled in with the fun details. Who else but Bill Yenne would quote messages back and forth of American air commanders trying to rein in air ace Richard Bong as he kept wanting to fly? The tongue-in-cheek admonishments of the generals to Bong to be careful in the air are worth the price of this book” —Clint Johnson, author of 'Tin Cans & Greyhounds: The Destroyers that Won Two World Wars'

“This authoritative and engaging work of military nonfiction traces the history of the air forces commanded by General Douglas MacArthur, from the B-17 bomber crews defending the Philippines against Japanese invasion in 1941 to the F-86 jet pilots dueling with Communist MiGs over Korea a decade later. A must-read for anyone interested in American airpower and the epic career of one of the nation's most famous-and controversial-military leaders.” —Steven K. Bailey, author of 'Bold Venture: The American Bombing of Japanese-Occupied Hong Kong, 1942-1945'

“In this book, Bill Yenne expertly guides the reader through the development of MacArthur's air force, from just a few planes and crews to the force that would dominate the skies and lead to the final days of the Rising Sun. This revelatory and groundbreaking chronicle reinforces the legacy of a general who stands alone in modern military history.” —Brian Sobel, author of 'The Fighting Pattons'

"Bill Yenne’s story of the airmen who exhibited those traits in the skies over the southwest Pacific and Korea is a welcome reminder of the debt all Americans owe to those (now men and women) who fight for us." - New York Journal of Books

"Yenne is to be saluted for penning an objective chronicle of a crucial but often overlooked part of the five-star general’s legacy." - Toy Soldier & Model Figure

"Aviation historian Yenne gives us a good look at American air power in the Pacific and East Asia from the early 1930s through the Korean War … good book for anyone interested in air power or the Pacific War, the lack of documentation makes it less useful for the serious scholar of the subject." - New York Military Affairs Symposium

"Throughout, Yenne provides a detailed, objective assessment of how the controversial general alternately used and misused airpower via his successive flying commanders. In that regard, MacArthur’s Air Force likely will become a standard reference." - History Net

This feature require that you enable JavaScript in your browser.
END_OF_DOCUMENT_TOKEN_TO_BE_REPLACED

This feature require that you enable JavaScript in your browser.
END_OF_DOCUMENT_TOKEN_TO_BE_REPLACED

This feature require that you enable JavaScript in your browser.
END_OF_DOCUMENT_TOKEN_TO_BE_REPLACED