US Navy Battleships 1895–1908: The Great White Fleet and the beginning of US global naval power (New Vanguard) (Paperback) 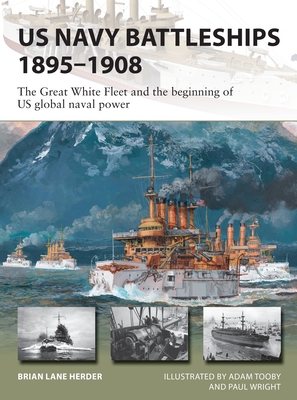 The epic story of the American battleships that turned the US Navy into a global power, and were made famous in the cruise of the “Great White Fleet.”

The last predreadnought battleships of the US Navy were critical to the technological development of US battleships, and they were the first tool of international hard power wielded by the United States, a nation which would eventually become the world's dominant political and military power of the 20th century. These battleships were the stars of the 1907–09 Great White Fleet circumnavigation, in which the emerging power and reach of the US Navy was displayed around the world. They also took part in the bombardment and landings at Veracruz, some served as convoy escorts in World War I, and the last two were transferred to the Hellenic Navy and were sunk during World War II.

Brian Lane Herder graduated with a BA in History from the University of Kansas in 2003, and a Masters of Library Science from Emporia State University in 2009. He is a legislative librarian for the Kansas state government and his historical research interests include the US military, naval warfare, and World War II.

Adam Tooby is an internationally renowned digital artist and illustrator. His work can be found in publications worldwide and as box art for model aircraft kits. He also runs a successful illustration studio and aviation prints business. He is based in Cheshire, UK. To buy artwork, or contact the artist, visit http://www.adamtooby.com/.

This feature require that you enable JavaScript in your browser.
END_OF_DOCUMENT_TOKEN_TO_BE_REPLACED

This feature require that you enable JavaScript in your browser.
END_OF_DOCUMENT_TOKEN_TO_BE_REPLACED

This feature require that you enable JavaScript in your browser.
END_OF_DOCUMENT_TOKEN_TO_BE_REPLACED