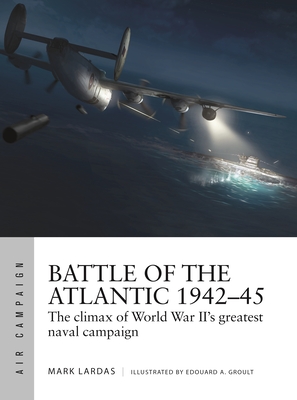 This illustrated study explores, in detail, the climactic events of the Battle of the Atlantic, and how air power proved to be the Allies' most important submarine-killer in one of the most bitterly fought naval campaigns of World War II.

As 1942 opened, both Nazi Germany and the Allies were ready for the climactic battles of the Atlantic to begin. Germany had 91 operational U-boats, and over 150 in training or trials. Production for 1942–44 was planned to exceed 200 boats annually. Karl Dönitz, running the Kriegsmarine's U-boat arm, would finally have the numbers needed to run the tonnage war he wanted against the Allies.

Meanwhile, the British had, at last, assembled the solution to the U-boat peril. Its weapons and detection systems had improved to the stage that maritime patrol aircraft could launch deadly attacks on U-boats day and night. Airborne radar, Leigh lights, Magnetic Anomaly Detection (MAD), and the Fido homing torpedo all turned the anti-submarine warfare (ASW) aircraft into a submarine-killer, while shore and ship-based technologies such as high-frequency direction finding and signals intelligence could now help aircraft find enemy U-boats. Following its entry into the war in 1941, the United States had also thrown its industrial muscle behind the campaign, supplying VLR Liberator bombers to the RAF and escort carriers to the Royal Navy. The US Navy also operated anti-submarine patrol blimps and VLR aircraft in the southern and western Atlantic, and sent its own escort carriers to guard convoys.

This book, the second of two volumes, explores the climactic events of the Battle of the Atlantic, and reveals how air power – both maritime patrol aircraft, and carrier aircraft – ultimately proved to be the Allies' most important weapon in one of the most bitterly fought naval campaigns of World War II.

Mark Lardas holds a degree in Naval Architecture and Marine Engineering, but spent his early career at the Johnson Space Center doing Space Shuttle structural analysis, and space navigation. An amateur historian and a long-time ship modeler, Mark Lardas currently lives and works in League City, Texas. He has written extensively about modeling as well as naval, maritime, and military history.

Edouard Groult grew up inspired by watching historical documentaries with his father and developed a fascination for historical and fantasy art. Following art studies in both Paris and Belgium he worked as a concept artist in the videogame industry and in recent years has also undertaken historical commissions while working as a freelancer for historical magazines. He lives and works in Oxford, UK.

This feature require that you enable JavaScript in your browser.
END_OF_DOCUMENT_TOKEN_TO_BE_REPLACED

This feature require that you enable JavaScript in your browser.
END_OF_DOCUMENT_TOKEN_TO_BE_REPLACED

This feature require that you enable JavaScript in your browser.
END_OF_DOCUMENT_TOKEN_TO_BE_REPLACED