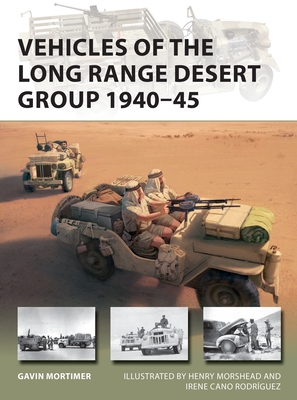 The Long Range Desert Group was one of the most famous special units of World War II, operating heavily modified vehicles deep behind enemy lines to gather intelligence and support the raids of David Stirling's new Special Air Service.

When war broke out, a pre-war explorer and army officer, Ralph Bagnold, convinced Middle East Command of the need for a reconnaissance force to penetrate into Italian-held desert. Bagnold tested four types of vehicles over rocks and through soft sand to find the best one for his new unit. Bagnold selected the Chevrolet WB (30 CWT) as the signature vehicle of the Long Range Desert Group because it is "fast, simple and easy to handle". With left-hand steering, horizontal grill and round fenders on the rear wheels, these trucks proved themselves popular and effective. The durability of the Chevrolets was demonstrated in January 1941 with an audacious raid on the Italian fort/air strip at Murzuk, hundreds of miles behind enemy lines.

This book explains the detail of all the vehicles of the LRDG, as well as their modifications, driving techniques, and special kit for surviving behind enemy lines in one of the most hostile environments on earth.

Gavin Mortimer is a writer, historian and television consultant whose ground-breaking book Stirling's Men remains the definitive history of the wartime SAS. Drawing on interviews with more than 60 veterans, most of whom had never spoken
publicly, the book was the first comprehensive account of the SAS Brigade. He has also written histories of the SBS, Merrill's Marauders and the LRDG, again drawing heavily on veteran interviews. He has published a variety of titles with Osprey including The Long Range Desert Group in World War II and The SAS in World War II.

Henry Morshead is a designer in the British helicopter, automotive and bespoke sectors, with clients including BAC, Noble, NIO, and Royal Enfield. He is also a STEM Ambassador with the Bloodhound supersonic car project. A former officer in the Royal Engineers and illustrator for Jane's, he maintains a keen interest in the design and use of military land and air vehicles.

Irene Cano Rodríguez (known as Araire) is a freelance artist working and living in Spain. Since 2014, she has worked as a specialized historical illustrator, recreating historical scenes for museums, studios, editorials and magazines. Nowadays she also combines her work as an illustrator with teaching archaeological illustration.

This feature require that you enable JavaScript in your browser.
END_OF_DOCUMENT_TOKEN_TO_BE_REPLACED

This feature require that you enable JavaScript in your browser.
END_OF_DOCUMENT_TOKEN_TO_BE_REPLACED

This feature require that you enable JavaScript in your browser.
END_OF_DOCUMENT_TOKEN_TO_BE_REPLACED