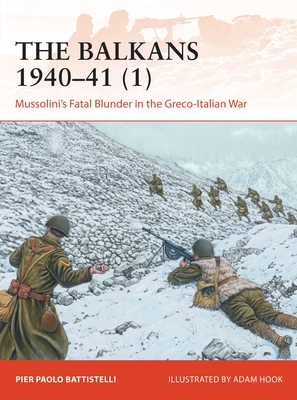 The first of two volumes on the Axis campaigns in the Balkans, exploring Mussolini's fateful decision to move against Greece in October 1940. The Greek President Metaxas rejected the Italian ultimatum with a famous 'Oxi' ('No'), and what followed was Italy's first debacle in World War II.

In the wake of Italy's rapid annexation of Albania in April 1940, Mussolini's decision to attack Greece in October that year is widely acknowledged as a fatal mistake, leading to a domestic crisis and to the collapse of Italy's reputation as a military power (re-emphasized by the Italian defeat in North Africa in December 1940). The Italian assault on Greece came to a stalemate in less than a fortnight, and was followed a week later by a Greek counter-offensive that broke through the Italian defences before advancing into Albania, forcing the Italian forces to withdraw north before grinding to a half in January 1941 due to logistical issues. Eventually, the Italians took advantage of this brief hiatus to reorganize and prepare a counteroffensive, the failure of which marked the end of the first stage of the Axis Balkan campaign.

The first of two volumes examining the Axis campaigns in the Balkans, this book offers a detailed overview of the Italian and Greek armies, their fighting power, and the terrain in which they fought. Complimented by rarely seen images and full color illustrations, it shows how expectations of an easy Italian victory quickly turned into one of Mussolini's greatest blunders.

Pier Paolo Battistelli earned his PhD in Military History at the University of Padua. A scholar of German and Italian politics and strategy throughout World War II, he is active in Italy and abroad writing titles and essays on military history subjects. A contributor to the Italian Army Historical Office, he is currently revising his PhD thesis for publication: The War of the Axis: German and Italian Military Partnership in World War Two, 1939-1943.

This feature require that you enable JavaScript in your browser.
END_OF_DOCUMENT_TOKEN_TO_BE_REPLACED

This feature require that you enable JavaScript in your browser.
END_OF_DOCUMENT_TOKEN_TO_BE_REPLACED

This feature require that you enable JavaScript in your browser.
END_OF_DOCUMENT_TOKEN_TO_BE_REPLACED