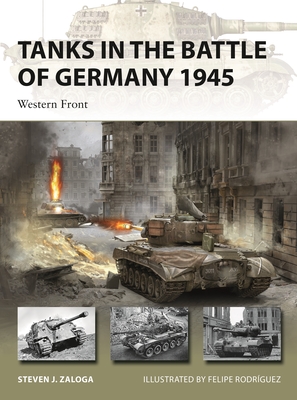 A new study and analysis of the final months of tank warfare in World War II, as the Allied armies rolled into Germany and fought the Wehrmacht's tanks on home soil.

The crossing of the river Rhine marked the beginning of the end of the Third Reich, but the Wehrmacht would fight ferociously on its home soil until the fall of Berlin. The Battle of Germany saw the most advanced tanks of the Allies pitted against the remnants of the once-formidable Panzerwaffe, now exhausted and lacking many of the essentials of armored warfare, but equipped with the biggest and most powerful tanks they would ever field.

In these last months the Allies were now equipped with the most advanced Shermans such as the M4A3E8, as well as some of the types that would go on to have successful postwar careers such as the Pershing, Comet, and Chaffee. In contrast the Panzer forces had pinned their hopes on small numbers of monstrous types such as the Jagdtiger and Tiger II, as well as the workhorse Sturmgeschütz and Panzer IVs and Vs. But with German forces crumbling, the Panzerwaffe lacked trained crews, replacement vehicles and fuel, while the Allies' well-supported tank forces advanced through Germany in spectacular combined-arms fashion.

Packed with information on tank numbers, types, and comparative performance, this book sheds new light on the two sides' tanks, organization, and doctrine, and explains how the ultimate tank battles of World War II were really fought.

Steven J. Zaloga received his BA in History from Union College and his MA from Columbia University. He has worked as an analyst in the aerospace industry for four decades, covering missile systems and the international arms trade, and has served with the Institute for Defense Analyses, a federal think tank. He is the author of numerous books on military technology and history, including NVG 294 Allied Tanks in Normandy 1944 and NVG 283 American Guided Missiles of World War II. He currently lives in Maryland, USA.

Felipe Rodríguez Náñez (aka Felipe Rodna) was born in 1976, and lives with his wife and two sons in Salamanca, Spain, where he works as an architect and computer graphics artist. He combines his experience in CG art and his passion for modelling in his illustrations, where he looks for a good balance between technical detail and craft.

This feature require that you enable JavaScript in your browser.
END_OF_DOCUMENT_TOKEN_TO_BE_REPLACED

This feature require that you enable JavaScript in your browser.
END_OF_DOCUMENT_TOKEN_TO_BE_REPLACED

This feature require that you enable JavaScript in your browser.
END_OF_DOCUMENT_TOKEN_TO_BE_REPLACED