Liaison 1914: A Narrative of a Great Defeat (Hardcover) 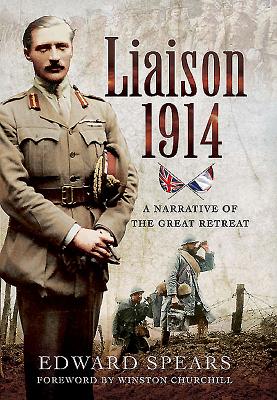 Many historians, not least Winston Churchill, agree that The Great War was decided during the first month of fighting. Fortunately a young highly literate and talented British officer was superbly well placed to witness this historic period.

Thanks to his fluent French, Edward Louis Spears was sent in mid August 1914 to liaise between Field Marshal Sir John French and the French High Command. In the weeks that followed, events moved at lightning speed and decisions were made without consulting or informing their counterparts. It fell to Spears to update the British of their ally's moves. Without modern communication this often involved Spears traveling on clogged roads between headquarters.

As the sole British representative at first, HQ Fifth French Army, and then Tenth Army, the influence of this 28 year old author was immense and Spears on many occasions proved unworried about speaking his mind.

Clearly his efforts were appreciated; he was made a Chevalier de la Legion d'honeur and awarded the Military Cross (he was wounded four times).

Churchill, who became a lifelong friend, wrote the foreword to the original edition of this truly extraordinary account, which anyone who wishes to understand the events of 1914 must read.

This feature require that you enable JavaScript in your browser.
END_OF_DOCUMENT_TOKEN_TO_BE_REPLACED

This feature require that you enable JavaScript in your browser.
END_OF_DOCUMENT_TOKEN_TO_BE_REPLACED

This feature require that you enable JavaScript in your browser.
END_OF_DOCUMENT_TOKEN_TO_BE_REPLACED