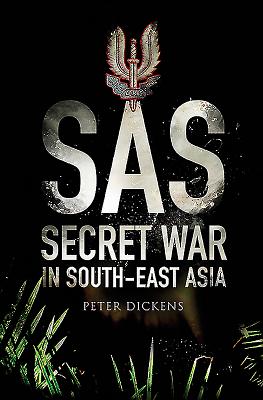 From 1963 to 1966 Britain successfully waged a secret war to keep the Federation of Malaysia free from domination by Soekarno's Indonesia and by Chinese Communists. At the forefront of this campaign were the men of the Special Air Service - the SAS - an elite branch of the British military whose essence is secrecy and whose tools are boldness, initiative, surprise, and high skill.

Working in four-man patrols, the SAS teams first made friends with the head-hunting border tribes and even trained some of them as an irregular military force. As the conflict continued, SAS teams went beyond the borders into Indonesia, where they tracked down enemy camps, fired on supply convoys, staged ambushes, and attacked enemy soldiers in their riverboats.

By talking to those who were there, Peter Dickens has recreated what it was really like to fight in the jungles of Malaysia. He also captures the bravery and relentless pursuit of excellence that make the SAS the elite and prestigious regiment it is.

This feature require that you enable JavaScript in your browser.
END_OF_DOCUMENT_TOKEN_TO_BE_REPLACED

This feature require that you enable JavaScript in your browser.
END_OF_DOCUMENT_TOKEN_TO_BE_REPLACED

This feature require that you enable JavaScript in your browser.
END_OF_DOCUMENT_TOKEN_TO_BE_REPLACED