Inside Manzano: The Life of a Nuclear Special Weapons Storage Site (Paperback) 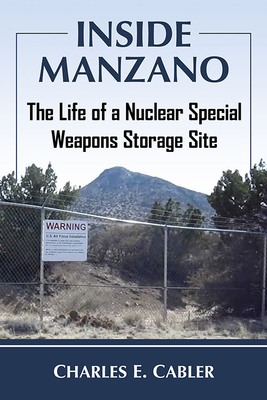 By Charles E. Cabler
Email or call for price.

In the late 1940s, the U.S. Department of Defense established a nuclear weapons depository in the Manzano Mountains of New Mexico. For more than 20 years, Manzano Base served as a maintenance and storage site for some of the most destructive weapons ever created. Operated by the U.S. Air Force, the facility was small and obscure, with highly restricted access. Its covert mission fostered a sense of mystery, leaving the public to speculate about what really went on there. The site was decommissioned in 1992 yet its rich history continues to influence America's nuclear weapons program. This book tells the story of Manzano and the personnel who served there. Firsthand accounts recall their experiences of nuclear weapons accidents, aircraft crashes, UFO/UAF sightings and a radiation demonstration called tickling the tiger's tail.

Charles E. Cabler served with the USAF 1962-1968, stationed at the 3800 Air Base Wing, Maxwell AFB, Montgomery, Alabama; the 1094 Air Police Squadron Manzano Base, Albuquerque, New Mexico; and the Air Force Reserve, Denver, Colorado. He served during the Cuban Missile Crisis and the Vietnam War, earning the National Defense Medal with Ribbon. He is a member of the American Legion Post 11 in Florence, Alabama and the USAF Police Alumni Association, and a volunteer adviser for the American Corporate Partners Organization, providing career guidance to military personnel as they transition into civilian life. He lives in Florence, Alabama.

This feature require that you enable JavaScript in your browser.
END_OF_DOCUMENT_TOKEN_TO_BE_REPLACED

This feature require that you enable JavaScript in your browser.
END_OF_DOCUMENT_TOKEN_TO_BE_REPLACED

This feature require that you enable JavaScript in your browser.
END_OF_DOCUMENT_TOKEN_TO_BE_REPLACED