The Agitators: Three Friends Who Fought for Abolition and Women's Rights (Hardcover) 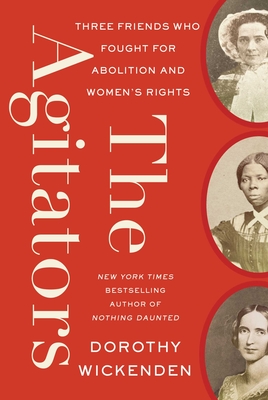 An LA Times Best Book of the Year

“Engrossing... examines the major events of the mid 19th century through the lives of three key figures in the abolitionist and women’s rights movements.” —Smithsonian

From the executive editor of The New Yorker, a riveting, provocative, and revelatory history of abolition and women’s rights, told through the story of three women—Harriet Tubman, Frances Seward, and Martha Wright—in the years before, during and after the Civil War.

“The Agitators tells the story of America before the Civil War through the lives of three women who advocated for the abolition of slavery and for women’s rights as the country split apart. Harriet Tubman, Martha Coffin Wright, and Frances A. Seward are the examples we need right now—another time of divisiveness and dissension over our nation’s purpose ‘to form a more perfect union.’” —Hillary Rodham Clinton

In the 1850s, Harriet Tubman, strategically brilliant and uncannily prescient, rescued some seventy enslaved people from Maryland’s Eastern Shore and shepherded them north along the underground railroad. One of her regular stops was Auburn, New York, where she entrusted passengers to Martha Coffin Wright, a Quaker mother of seven, and Frances A. Seward, the wife of William H. Seward, who served over the years as governor, senator, and secretary of state under Abraham Lincoln. During the Civil War, Tubman worked for the Union Army in South Carolina as a nurse and spy, and took part in a spectacular river raid in which she helped to liberate 750 slaves from several rice plantations.

Wright, a “dangerous woman” in the eyes of her neighbors, worked side by side with Elizabeth Cady Stanton and Susan B. Anthony to organize women’s rights and anti-slavery conventions across New York State, braving hecklers and mobs when she spoke. Frances Seward, the most conventional of the three friends, hid her radicalism in public, while privately acting as a political adviser to her husband, pressing him to persuade President Lincoln to move immediately on emancipation.

The Agitators opens in the 1820s, when Tubman is enslaved and Wright and Seward are young homemakers bound by law and tradition, and ends after the war. Many of the most prominent figures of the era—Lincoln, William H. Seward, Frederick Douglass, Daniel Webster, Charles Sumner, John Brown, William Lloyd Garrison—are seen through the discerning eyes of the protagonists. So are the most explosive political debates: about the civil rights of African Americans and women, about the enlistment of Black troops, and about opposing interpretations of the Constitution.

Through richly detailed letters from the time and exhaustive research, Wickenden traces the second American revolution these women fought to bring about, the toll it took on their families, and its lasting effects on the country. Riveting and profoundly relevant to our own time, The Agitators brings a vibrant, original voice to this transformative period in our history.

Dorothy Wickenden is the author of Nothing Daunted and The Agitators and has been the executive editor of The New Yorker since January 1996. She also writes for the magazine and is the moderator of its weekly podcast The Political Scene. A former Nieman Fellow at Harvard, Wickenden was national affairs editor at Newsweek from 1993-1995, and before that was the longtime executive editor at The New Republic. She lives with her husband in Westchester, New York.

Praise for The Agitators

An LA Times Best Book of the Year

"Wickenden, executive editor of the New Yorker, does an almost perfect job of braiding together the stories of three very different women."
—Los Angeles Times

"The Agitators is an impressive narrative of three women who were at the center of a burgeoning movement. Their trailblazing path is captured and related deftly by the author, their triumphs and tragedies narrated emphatically for a modern audience. All three women lived and breathed for the freedom of all men and women, selflessly giving as much as they were capable. An A+ historical narrative."
—San Francisco Book Review

"Wickenden does a brilliant job of weaving all the complicated threads together, telling a compelling story that we thought we knew well. This is history at its best: personal, powerful, and inspiring.”
—Marissa Moss, New York Journal of Books

"An epic and intimate history. . . . Wickenden's commitment to keeping her trio in the frame and in focus showcases prodigious narrative control. The Agitators is a masterpiece, not least, of structure. . . . . Entwining these three asymmetrical lives as deftly as Wickenden does proves illuminating."
—Jane Kamensky, New York Times Book Review

"Absorbing and richly rewarding . . . . [Wickenden] traces the Auburn women's lives with intelligence, compassion, and verve . . . [and her] assessment of the era leading up to the Civil War will resonate with readers in our own fractious era."
—Melanie Kirkpatrick, Wall Street Journal

"Riveting. . . . [Wickenden] weaves [these] stories together with gravity and humor in a narrative so tightly knit it reads like accomplished literary fiction. . . .  "The Agitators" will move you, and it will make you sad. So much of what convulsed the country in the 19th century remains with us: mob violence, virulent racism and an appalling disregard for human dignity. But there's another message: People of fierce and heartfelt principles can bend history to their will. If you're an agitator, even a quiet one, read this book."
—Mary Ann Gwinn, The Star Tribune

"New Yorker executive editor Wickenden (Nothing Daunted) expertly weaves together the biographies of “co-conspirators and intimate friends” Harriet Tubman, Martha Wright, and Frances Seward in this novelistic history... Through extensive research and fluid writing, Wickenden rescues Wright and Seward from obscurity and provides a new perspective on Tubman’s life and work. This is an essential addition to the history of American progressivism."
—Publishers Weekly, starred review

"She brings a reporter’s eye for detail to this complex history... [and] invites readers to take a closer look at the path of American progress and the women who guided it."
—Carla Jean Whitley, BookPage

"Told with literary flare, Dorothy Wickenden's The Agitators sheds some much-needed light on the lives and passions of a small circle of abolitionists: Harriet Tubman, Martha Wright, and Frances Seward."
—Bustle

"New Yorker executive editor Wickenden brings three fascinating women to life in rich, humanizing detail ... Wickenden pulls this history out of the dry dustiness of fact and adds color and warmth to its retelling. The women of our shared past deserve more treatments like this."
—Booklist

“An original portrait of three original women who muscled aside expectations, obligations, and neighborhood gossip for the sake of their consciences.  Dorothy Wickenden not only resurrects these unlikely agitators but plunges us deep into their volatile world, with a supporting cast that includes Julia Ward Howe, Elizabeth Cady Stanton, and Abraham Lincoln.  This is rich and rousing history, crisply and intimately rendered, its moral collisions vivid and vital on the page.“
—Stacy Schiff, author of Cleopatra and The Witches

“The Agitators tells the story of America before the Civil War through the lives of three women who advocated for the abolition of slavery and women’s rights as the country split apart. Harriet Tubman, Martha Coffin Wright and Frances A. Seward are the examples we need right now—another time of divisiveness and dissension over our nation’s purpose ‘to form a more perfect union.’”
—Hillary Clinton

"This is an extraordinary peek into the lives of three women who courageously pushed past the tight worlds that confined them to create the bones and muscle of the freedom movements that we now know. That they walked in a land of giants – Lincoln, Lee, John Brown – is no surprise. That they knew one another, were giants themselves, and accorded second class status is no surprise either. The treat is the refreshing decency, skillful ease, and extraordinary skill with which their stories are intertwined, showing how each pressed against the seams of imprisonment with such force and resilience that their collective song continues to resonate today. That is why Dorothy Wickenden is one of the deans of our game."
—James McBride

“When writing about the Civil War era, focus is everything: how it is seen depends entirely on who is seeing it. In The Agitators, Dorothy Wickenden has fortunately chosen three brilliantly engaging characters. The result is unexpected, original, and profoundly illuminating.”
—S.C. Gwynne, author of Hymns of the Republic and Rebel Yell

"Inspiring and important – and a rousing good read – The Agitators reminds us how, even in the darkest of times, there is light. And when a few fierce women join forces against that darkness, they can win."
—Jeannette Walls, author of The Glass Castle

"As a revolutionary, Harriet Tubman made many allies, none more important than her Auburn, New York, neighbors Martha Wright and Frances Seward. Wright, a middle-class Quaker, and Seward, the wealthy wife of a famous statesman, learned their activism from the abolition and women's rights movements that surrounded them, as well as from Tubman's incomparable example. This is a unique, lyrically written, exhaustively researched, triple biography of epic proportions about three women, mothers and organizers all, woven into a single narrative about their activist struggles before and during the Civil War. Their lives burst from these pages, as do the crusades that began the liberation of African Americans and women across the nineteenth century. Wickenden possesses a novelist's eye for detail and a historian's passion for story, in a book about women with no formal political rights who changed their world."
—David W. Blight, Yale University, author of Frederick Douglass: Prophet of Freedom

"Dorothy Wickenden seamlessly weaves together the lives of her protagonists with the times that influenced them, and that they in turn profoundly affected. Vivid, enlightening, and engrossing, here is the story of three women who are fixtures of history but whose relevance to the present could scarcely be more apparent."
—Jelani Cobb, Professor at the Columbia School of Journalism and the author of The Substance of Hope: Barack Obama and the Paradox of Progress

Praise for Nothing Daunted

"An exquisite book."
—The Boston Globe

“A superb, stirring book. Through the eyes of two spirited and resourceful women from the civilized East, Wickenden makes the story of the American West engaging and personal. A delight to read.”
—Susan Orlean, author of The Orchid Thief

“A rich narrative… Nothing Daunted is an extraordinary book.”
—Denver Post

“Dorothy Wickenden’s recounting of her grandmother Dorothy Woodruff’s treacherous cross-country journey is as charming as it is rugged… This is Little House on the Prairie in petticoats, and it is enchanting.”
—NPR

“A great story, with a richly appealing character at the center...a tale of the triumph of determination over adversity...wonderfully American”
—Slate

“Dorothy Woodruff and Rosamond Underwood come alive in Nothing Daunted, Dorothy Wickenden’s fascinating slice of social history... Their story is blessed with a cast of supporting characters that novelists would envy.”
—USA Today

“Wickenden is a lucky and talented writer... Both women spring to life in this wonderful book.”
—Houston Chronicle

This feature require that you enable JavaScript in your browser.
END_OF_DOCUMENT_TOKEN_TO_BE_REPLACED

This feature require that you enable JavaScript in your browser.
END_OF_DOCUMENT_TOKEN_TO_BE_REPLACED

This feature require that you enable JavaScript in your browser.
END_OF_DOCUMENT_TOKEN_TO_BE_REPLACED