The Outpost: An Untold Story of American Valor (CD-Audio) 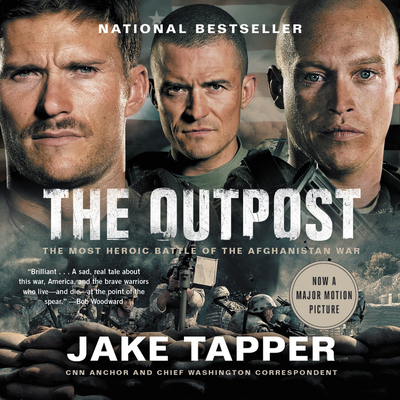 The basis of the film starring Orlando Bloom and Scott Eastwood, The Outpost is the heartbreaking and inspiring story of one of America's deadliest battles during the war in Afghanistan, acclaimed by critics everywhere as a classic.
At 5:58 AM on October 3rd, 2009, Combat Outpost Keating, located in frighteningly vulnerable terrain in Afghanistan just 14 miles from the Pakistani border, was viciously attacked. Though the 53 Americans there prevailed against nearly 400 Taliban fighters, their casualties made it the deadliest fight of the war for the U.S. that year. Four months after the battle, a Pentagon review revealed that there was no reason for the troops at Keating to have been there in the first place.

In The Outpost, Jake Tapper gives us the powerful saga of COP Keating, from its establishment to eventual destruction, introducing us to an unforgettable cast of soldiers and their families, and to a place and war that has remained profoundly distant to most Americans. A runaway bestseller, it makes a savage war real, and American courage manifest.
"The Outpost is a mind-boggling, all-too-true story of heroism, hubris, failed strategy, and heartbreaking sacrifice. If you want to understand how the war in Afghanistan went off the rails, you need to read this book." -- Jon Krakauer

"Tapper's sassy style...gives the book a humorous angle that probably won't be found in most mainstream books about Election 2000....For those who are looking for an insider's view and tales, this is the book to buy."—National Journal

"Tapper, the network's ambitious, telegenic Senior White House Correspondent, has made a name for himself as a tough questioner...ABC's tenacious reporter is already proving to be the new star of the White House press pack."—The Daily Beast

This feature require that you enable JavaScript in your browser.
END_OF_DOCUMENT_TOKEN_TO_BE_REPLACED

This feature require that you enable JavaScript in your browser.
END_OF_DOCUMENT_TOKEN_TO_BE_REPLACED

This feature require that you enable JavaScript in your browser.
END_OF_DOCUMENT_TOKEN_TO_BE_REPLACED