Roots of Conflict: A Military Perspective on the Middle East and the Persian Gulf Crisis (Paperback) 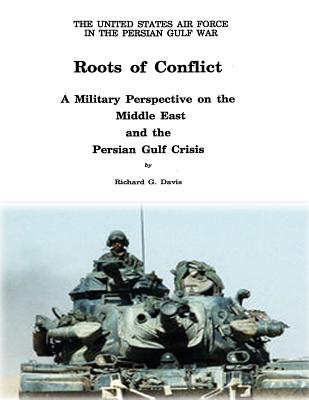 Early on the morning of January 17, 1991, the Persian Gulf War began. It consisted of massive allied air strikes on Iraq and Iraqi targets in Kuwait. The United States Air Force spearheaded the air offensive and furnished the bulk of the attacking aircraft. During forty-two days of fighting, the U.S. Air Force simultaneously conducted two closely coordinated air campaigns: one in support of allied ground forced; the other, attacking strategic targets. Planners of the strategic air campaign sought to isolate and incapacitate Saddam Hussein's government; gain and maintain air supremacy to permit unhindered air operations; destroy Iraq's nuclear, biological, and chemical capabilities; and eliminate Iraq's offensive military capability, which included its key military production facilities, their infrastructure, and the instruments it used to project its power - the Iraqi Air Force, the Republican Guard, and short-range ballistic missiles. This study develops background information to place the Persian Gulf War in its proper historical and cultural contexts, unfamiliar to and not easily understood by Americans. The first essay quickly summarizes the relationship between Arab culture and Islam, the history of Islam and the Arab conquests, and the creation of one of the flash points in present-day Middle Eastern conflicts - the Arab-Jewish dispute over Palestine. The second essay provides a military analysis of the Arab-Israeli wars from 1948 to 1982. It describes the performance of the engaged armed forces, the performance of Western versus Soviet weapons systems, the development of the respective forces' military professionalization, and the ability of the warring parties to learn from their experiences. The final three essays describe the recent history of the three regional powers of the Persian Gulf - Saudi Arabia, Iran, and Iraq. In addition to providing a detailed character analysis of Saddam Hussein and a military analysis of the Iran-Iraq War, these final sections examine the tension that arose in the three nations when the desire for modernization confronted the demands of Islamic conservatism.

This feature require that you enable JavaScript in your browser.
END_OF_DOCUMENT_TOKEN_TO_BE_REPLACED

This feature require that you enable JavaScript in your browser.
END_OF_DOCUMENT_TOKEN_TO_BE_REPLACED

This feature require that you enable JavaScript in your browser.
END_OF_DOCUMENT_TOKEN_TO_BE_REPLACED