Strange Fruit of the Black Pacific: Imperialism's Racial Justice and Its Fugitives (Nation of Nations #3) (Paperback) 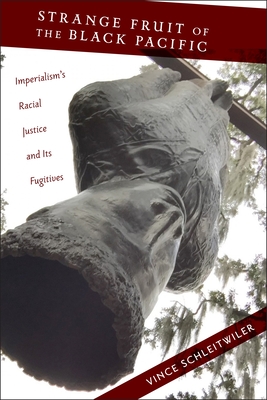 Set between the rise of the U.S. and Japan as Pacific imperial powers in the 1890s and the aftermath of the latter's defeat in World War II, Strange Fruit of the Black Pacific traces the interrelated migrations of African Americans, Japanese Americans, and Filipinos across U.S. domains.

Offering readings in literature, blues and jazz culture, film, theatre, journalism, and private correspondence, Vince Schleitwiler considers how the collective yearnings and speculative destinies of these groups were bound together along what W.E.B. Du Bois called the world-belting color line. The links were forged by the paradoxical practices of race-making in an aspiring empire--benevolent uplift through tutelage, alongside overwhelming sexualized violence--which together comprise what Schleitwiler calls "imperialism's racial justice." This process could only be sustained through an ongoing training of perception in an aesthetics of racial terror, through rituals of racial and colonial violence that also provide the conditions for an elusive countertraining.

With an innovative prose style, Strange Fruit of the Black Pacific pursues the poetic and ethical challenge of reading, or learning how to read, the black and Asian literatures that take form and flight within the fissures of imperialism's racial justice. Through startling reinterpretations of such canonical writers as James Weldon Johnson, Nella Larsen, Toshio Mori, and Carlos Bulosan, alongside considerations of unexpected figures such as the musician Robert Johnson and the playwright Eulalie Spence, Schleitwiler seeks to reactivate the radical potential of the Afro-Asian imagination through graceful meditations on its representations of failure, loss, and overwhelming violence.

This feature require that you enable JavaScript in your browser.
END_OF_DOCUMENT_TOKEN_TO_BE_REPLACED

This feature require that you enable JavaScript in your browser.
END_OF_DOCUMENT_TOKEN_TO_BE_REPLACED

This feature require that you enable JavaScript in your browser.
END_OF_DOCUMENT_TOKEN_TO_BE_REPLACED