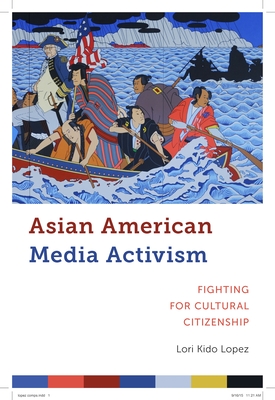 By Lori Kido Lopez
Email or call for price.
usually available in 3-7 days

How activists and minority communities use media to facilitate social change and achieve cultural citizenship. Among the most well-known YouTubers are a cadre of talented Asian American performers, including comedian Ryan Higa and makeup artist Michelle Phan. Yet beneath the sheen of these online success stories lies a problem--Asian Americans remain sorely underrepresented in mainstream film and television. When they do appear on screen, they are often relegated to demeaning stereotypes such as the comical foreigner, the sexy girlfriend, or the martial arts villain. The story that remains untold is that as long as these inequities have existed, Asian Americans have been fighting back--joining together to protest offensive imagery, support Asian American actors and industry workers, and make their voices heard. Providing a cultural history and ethnography, Asian American Media Activism assesses everything from grassroots collectives in the 1970s up to contemporary engagements by fan groups, advertising agencies, and users on YouTube and Twitter. In linking these different forms of activism, Lori Kido Lopez investigates how Asian American media activism takes place and evaluates what kinds of interventions are most effective. Ultimately, Lopez finds that activists must be understood as fighting for cultural citizenship, a deeper sense of belonging and acceptance within a nation that has long rejected them.

Lori Kido Lopez is Associate Professor of Media and Cultural Studies in the Communication Arts Department at the University of Wisconsin-Madison and the author of Asian American Media Activism.

This feature require that you enable JavaScript in your browser.
END_OF_DOCUMENT_TOKEN_TO_BE_REPLACED

This feature require that you enable JavaScript in your browser.
END_OF_DOCUMENT_TOKEN_TO_BE_REPLACED

This feature require that you enable JavaScript in your browser.
END_OF_DOCUMENT_TOKEN_TO_BE_REPLACED