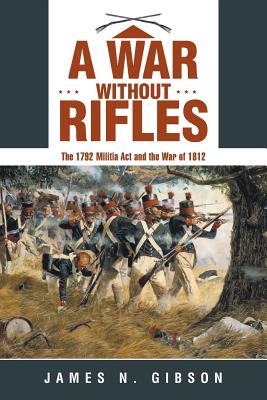 By James N. Gibson
$20.99
usually available in 5-10 days
(This is a special order book which cannot be returned.)

A War without Rifles: The 1792 Militia Act and the War of 1812 turns an eye to the conflict most overlooked by historians, even in a decade marking the bicentennial of the first declared war fought by the United States of America. James N. Gibson remedies this oversight by presenting his investigation of the interplay between the Militia Act, passed by Congress in 1792, and the conduct of the War of 1812. Despite the common perception that the act was never implemented, A War without Rifles documents its post-1792 history, noting, for instance, the requirement that each able-bodied American man own a military musket and the connection between the act's caliber clause and the shortage of rifles in the War of 1812.

After reviewing the "silent wars" with European powers in the years preceding the War of 1812, this history turns its attention to the war years. Plentiful and careful documentation roots the narrative in numerous primary sources. In addition, four appendices provide the full text of the Militia Act of 1792, records of debates, information on federal arms production, and lists of federal arms contracts with civilian manufacturers. One hundred figures provide an extensive gallery illustrating the history.

This feature require that you enable JavaScript in your browser.
END_OF_DOCUMENT_TOKEN_TO_BE_REPLACED

This feature require that you enable JavaScript in your browser.
END_OF_DOCUMENT_TOKEN_TO_BE_REPLACED

This feature require that you enable JavaScript in your browser.
END_OF_DOCUMENT_TOKEN_TO_BE_REPLACED